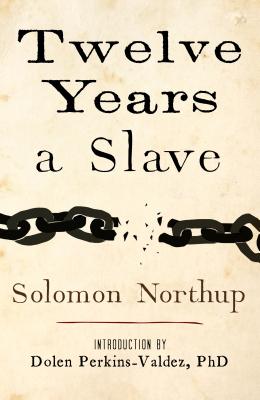 The story that inspired the major motion picture, with an introduction by the bestselling author of Wench, Dolen Perkins-Valdez, Twelve Years a Slave is a harrowing, vividly detailed, and utterly unforgettable account of slavery.

The story that inspired the major motion picture, with an introduction by the bestselling author of Wench, Dolen Perkins-Valdez, Twelve Years a Slave is a harrowing, vividly detailed, and utterly unforgettable account of slavery.

Solomon Northup was an entrepreneur and dedicated family man, father to three young children, Elizabeth, Margaret, and Alonzo. What little free time he had after long days of manual and farm labor he spent reading books and playing the violin. Though his father was born into slavery, Solomon was born and lived free.

In March 1841, two strangers approached Northup, offering him employment as a violinist in a town hundreds of miles away from his home in Saratoga Springs, New York. Solomon bid his wife farewell until his return. Only after he was drugged and bound did he realize the strangers were kidnappers—that nefarious brand of criminals in the business of capturing runaway and free blacks for profit. Thus began Northup's horrific life as a slave.

Dehumanized, beaten, and worked mercilessly, Northup suffered all the more, wondering what had become of his family. One owner was savagely cruel and Northup recalls he was “indebted to him for nothing, save undeserved abuse.” Just as he felt the summer of his life fade and all hope nearly lost, he met a kindhearted stranger who changed the course of his life.

With its firsthand account of this country's Peculiar Institution, this is a book no one interested in American history can afford to miss.

Solomon Northup (1808–c.1864-75) was a free-born African American from Saratoga Springs, New York, who was kidnapped into slavery in 1841. After his escape, he became an abolitionist and published his memoir, Twelve Years a Slave (1853). He gave many lectures in support of the abolitionist causes and aided in the Underground Railroad for fugitive slaves.

Dolen Perkins-Valdez, PhD, is the author of the New York Times bestselling novel Wench. In 2011, she was a finalist for two NAACP Image Awards and the Hurston-Wright Legacy Award for fiction. She was also awarded the First Novelist Award by the Black Caucus of the American Library Association. Dr. Perkins-Valdez teaches in the Stonecoast (Maine) MFA program and lives in Washington, DC, with her family.