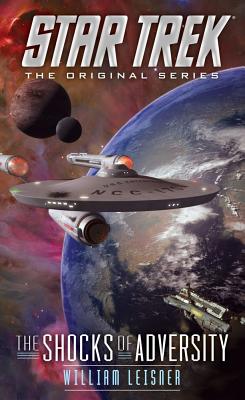 By William Leisner
$7.99
Email or call for price.

An original novel set in the universe of Star Trek: The Original Series!

Located far beyond the boundaries of explored space, the Goeg Domain is a political union of dozens of planets and races. When the U.S.S. Enterprise arrives in its territory to investigate an interstellar phenomenon, Commander Laspas of the Domain Defense Corps is at first guarded, then fascinated to discover the existence of an alliance of worlds much like his own, and finds a kindred spirit in Captain James T. Kirk. And when the Enterprise is attacked by the Domain’s enemies, crippling the starship’s warp capability and leaving its crew facing the prospect of a slow, months-long journey home, the Goeg leader volunteers the help of his own ship, offering to combine the resources of both vessels to bring the Enterprise to a nearby Domain facility to make the necessary repairs.

But what at first seems to be an act of peace and friendship soon turns out to be a devil’s bargain, as Kirk and the Enterprise crew learn that there are perhaps more differences than similarities between the Federation and the Domain. When the Goeg’s adversaries strike again, the Enterprise is drawn deeper and inexorably into the conflict, and Kirk begins to realize that they may have allied themselves with the wrong side....

William Leisner is the author of the acclaimed novels Star Trek: The Next Generation: Losing the Peace, and A Less Perfect Union (from the Myriad Universes collection Infinity's Prism).  He is a three-time winner of the late, lamented Star Trek: Strange New Worlds competition, as contributed tales to the official celebration of Star Trek's 40th anniversary in 2006, and TNG's 20th Anniversary in 2007.  A native of Rochester, New York, he currently lives in Minneapolis.