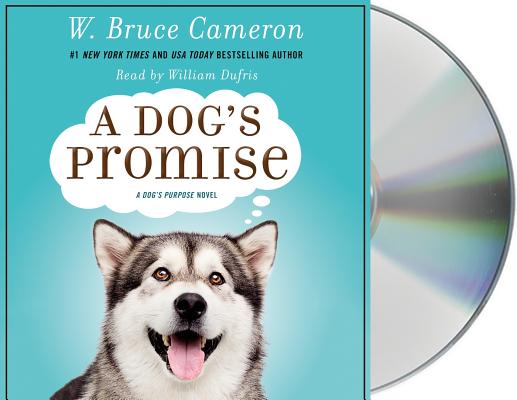 A Dog's Promise continues the story of Bailey, the good dog whose journey started in A Dog's Purpose and continued in A Dog's Journey (both major motion pictures). This time, Bailey is joined by Lacey, another very special dog, who helps Bailey fulfill his promise over the course of several lives.

This charming, wise canine soul brings joy, laughter, and comfort as he unites a family fractured by life's inevitable obstacles. The love and loyalty of these two memorable dogs shows us the incredible power of hope, truth, and unending devotion in this moving novel by award-winning author W. Bruce Cameron.

W. BRUCE CAMERON is the #1 New York Times and USA Today bestselling author of A Dog's Purpose, A Dog's Way Home, and A Dog's Journey (all now major motion pictures), The Dog Master, the A Dog's Purpose Puppy Tales for young readers (starting with Ellie's Story and Bailey's Story), The Dogs of Christmas, The Midnight Plan of the Repo Man, and others. He lives in California.

William Dufris began his audio career in London, England. He co-found the audio production company The Story Circle, Ltd in the UK. In the US, he founded Mind’s Eye Productions and co-founded Rocky Coast Radio Theatre in addition to The AudioComics Company, for which he is producer, director, actor and engineer. Durfis was nominated six times as a finalist for the APA's prestigious Audie Awards. He garnered eighteen Golden Earphones Awards through AudioFile magazine, which honored him as one of The Best Voices at the End of the Century. Of his work, AudioFile said, "William Dufris commands a dazzling array of voices that bring to life the dozens of audiobooks he’s narrated." His audiobook credits include many of Newt Gingrich and William R. Forstchen, Ph.D.'s works, such as Days of Infamy and Pearl Harbor, in addition to George McGovern’s Abraham Lincoln, Neal Stephenson’s Cryptonomicon and John Scalzi’s The Ghost Bridges.

Dufris acted on stage and in television and is best known as the original North American voice of the cartoon character Bob in Nickelodeon's popular children's show, Bob the Builder. Additionally, he worked with legendary director Dirk Maggs on his audio drama productions of Spider-Man.