The Unwinding: An Inner History of the New America (CD-Audio) 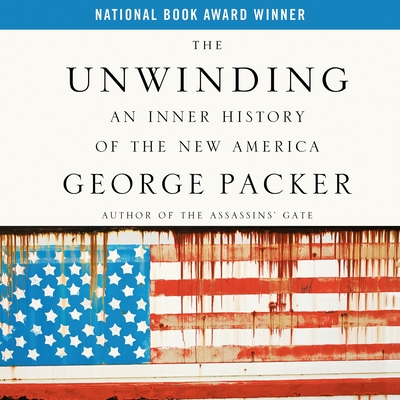 A riveting examination of a nation in crisis, from one of the finest political journalists of our generation

American democracy is beset by a sense of crisis. Seismic shifts during a single generation have created a country of winners and losers, allowing unprecedented freedom while rending the social contract, driving the political system to the verge of breakdown, and setting citizens adrift to find new paths forward. In The Unwinding, George Packer, author of The Assassins' Gate: America in Iraq, tells the story of the United States over the past three decades in an utterly original way, with his characteristically sharp eye for detail and gift for weaving together complex narratives.

The Unwinding journeys through the lives of several Americans, including Dean Price, the son of tobacco farmers, who becomes an evangelist for a new economy in the rural South; Tammy Thomas, a factory worker in the Rust Belt trying to survive the collapse of her city; Jeff Connaughton, a Washington insider oscillating between political idealism and the lure of organized money; and Peter Thiel, a Silicon Valley billionaire who questions the Internet's significance and arrives at a radical vision of the future. Packer interweaves these intimate stories with biographical sketches of the era's leading public figures, from Newt Gingrich to Jay-Z, and collages made from newspaper headlines, advertising slogans, and song lyrics that capture the flow of events and their undercurrents.

The Unwinding portrays a superpower in danger of coming apart at the seams, its elites no longer elite, its institutions no longer working, its ordinary people left to improvise their own schemes for success and salvation. Packer's novelistic and kaleidoscopic history of the new America is his most ambitious work to date.

George Packer is an award-winning author and staff writer at The Atlantic. His previous books include The Unwinding: An Inner History of the New America (winner of the National Book Award), The Assassins’ Gate: America in Iraq, and Our Man: Richard Holbrooke and the End of the American Century (winner of the Hitchens Prize and the Los Angeles Times Book Prize for biography). He is also the author of two novels and a play, and the editor of a two-volume edition of the essays of George Orwell.

Winner of the prestigious Audie Award (for History and Audio Drama), veteran actor Robert Fass is equally at home in a wide variety of styles, genres, characters, and dialects. A seven-time Audie nominee with over 100 unabridged audiobooks to his credit, Robert has also earned multiple Earphones Awards, including for his narration of Joe Golem and the Drowning City by Mike Mignola and Christopher Golden. Robert has given voice to modern and classic fiction writers alike, including Ray Bradbury, Joyce Carol Oates, John Steinbeck, Carlos Fuentes, Isaac Asimov, Ellery Queen, Steve Berry, Jeffrey Deaver, and Nele Neuhaus, plus bestselling nonfiction works in history, politics, health, journalism, philosophy, and business.

“[The Unwinding] hums--with sorrow, with outrage and with compassion . . . Packer's gifts are Steinbeckian in the best sense of that term . . . [Packer has] written something close to a nonfiction masterpiece.” —Dwight Garner, The New York Times

“Packer's dark rendering of the state of the nation feels pained but true. He offers no false hopes, no Hollywood endings, but he finds power in . . . the dignity and heart of a people.” —The Washington Post

“[The Unwinding] has many of the qualities of an epic novel . . . [a] professional work of journalism that also happens to be more intimate and textured--and certainly more ambitious--than most contemporary works of U.S. fiction dare to be . . . What distinguishes The Unwinding is the fullness of Packer's portraits, his willingness to show his subjects' human desires and foibles, and to give each of his subjects a fully throated voice.” —Héctor Tobar, The Los Angeles Times

“A monumental work that is both intimate and sweeping . . . Packer's writing dazzles . . . [his] reporting excels . . . The cumulative effect is extraordinary.” —Ken Armstrong, The Seattle Times

“Brilliant. Harrowing. Gorgeously written . . . The Unwinding is a lyrical requiem for a lost time, for downsized dreams and surrendered hopes. It's beautiful . . . but also . . . heartbreaking, a lush work of art that hurts all the more for being about the loss of hope and promise in America.” —The Daily Kos

“This is a work not just of fact, but of wit, irony, and astounding imagination.” —Lorin Stein, The Paris Review

“A work of prodigious, highly original reporting . . . [Packer] demonstrates that the future of reporting out in world isn't in eclipse . . . Packer's arduous venture commands attention.” —Joseph Lelyveld, The New York Review of Books

“Wide ranging, deeply reported, historically grounded and ideologically restrained . . . Instead of compelling us to engage with his theory of the past 35 years of the American experience, Packer invites us to explore the experience itself, as lived by our fellow citizens. They're human beings, not evidence for an agenda or fodder for talking points. Understanding that is the first step toward reclaiming the nation we share with them.” —Laura Miller, Salon

“[Packer is] among the best non-fiction writers in America . . . [he] weaves an unforgettable tapestry . . . In its sensibility, The Unwinding is closer to a novel than a work of non-fiction. It is all the more powerful for it.” —Edward Luce, The Financial Times

“[An] awe-inspiring X-Ray of the modern American soul.” —The Millions

“A brilliant and innovative book that transcends journalism to become literature.” —Bookforum

“[S]uperbly written and consistently thought-provoking . . . The Unwinding is long-form journalism at its best.” —Dallas News

“Masterful . . . thoughtful, thorough, and persuasive . . . the payoff comes when Packer's various elements combine in powerful and startling ways . . . What will stay with you . . . are the book's people, people Packer never turns into ideological mascots, people who struggle to survive, to create, to improve, even as the systems of support erode around them.” —The Christian Science Monitor

“Packer writes . . . beautifully and precisely; respectfully and, when warranted, critically. There is a straightforward and generous humanity in his prose.” —Michael Tomasky, The Daily Beast

“Packer's strength as a storyteller lies in his ability to marshal a diverse range of voices from across the class divide, in a nation deeply divided by social status.” —NPR Books.org

“Packer's is an American voice of exceptional clarity and humanity in a tradition of reportage that renders the quotidian extraordinary. When our descendants survey the ruins of this modern imperium and sift its cultural detritus, American voices like this will be the tiny treasures that endure.” —The Independent (UK)

“This angry, wise and moving state-of-the-union address is too subtle and clever to be prescriptive. Packer offers no simplistic solutions. But here's the thing. The writing in this fine work showcases the very same qualities of democratic generosity and fair-mindedness whose supposed disappearance in America its author most laments.” —The Telegraph (UK)

“Exemplary journalism . . . A foundational document in the literature of the end of America.” —Kirkus (starred review)

“A broad and compelling perspective on a nation in crisis . . . an illuminating, in-depth, sometimes frightening view of the complexities of decline and the enduring hope of recovery.” —Booklist (starred review)

“Trenchant . . . [the] brief biographies of seminal figures that shaped the current state of affairs offer the book's fiercest prose, such as in Packer's brutal takedown of Robert Rubin, secretary of the Treasury during some key 1990s financial deregulation that amplified the severity of the Great Recession of 2008. Packer has a keen eye for the big story in the small moment, writing about our fraying social fabric with talent that matches his dismay.” —Publishers Weekly (starred review)

“The Unwinding . . . echoes the symphonic rage of the celebrated television series The Wire . . . a tremendous work of reporting that pushes past abstractions and recycled debates . . . Whatever one’s views on American decline generally, it is difficult to put the book down without . . . a conviction that we can do better.” —The Washington Monthly

“[A] sprawling, trenchant narrative . . . Packer is a thorough, insightful journalist, and his in-depth profiles provide a window into American life as a whole . . . The Unwinding is a harrowing and bracing panoramic look at American society—things are bad everywhere, for everyone, but there’s still a sense of optimism. Through hard work and dedication we can pull ourselves out of the financial, political, and social mess we’ve created and become stronger as individuals and ultimately as a society.” —The Brooklyn Rail

“George Packer has crafted a unique, irresistible contraption of a book. Not since John Dos Passos's celebrated U.S.A. trilogy, which The Unwinding recollects and rivals, has a writer so cunningly plumbed the seething undercurrents of American life. The result is a sad but delicious jazz-tempo requiem for the post-World War II American social contract. You will often laugh through your tears at these tales of lives of ever-less-quiet desperation in a land going ever-more-noisily berserk.” —David M. Kennedy, Pulitzer Prize–winning author of Freedom from Fear and Over Here

“The Unwinding is the extraordinary story of what’s happened to our country over the past thirty years. George Packer gives us an intimate look into American lives that have been transformed by the dissolution of all the things that used to hold us together. The result is an epic—wondrous, bracing, and true—that will stand as the defining book of our time.” —Dexter Filkins, author of The Forever War

“The Unwinding presents a big, gorgeous, sad, utterly absorbing panorama of the relentless breakdown of the American social compact over a generation. George Packer communicates the scope and the human experience of the enormous change that is his subject better than any writer has so far.” —Nicholas Lemann, author of Redemption and The Promised Land

“Original, incisive, courageous, and essential. One of the best works of nonfiction I've read in years.” —Katherine Boo, National Book Award–winning author of Behind the Beautiful Forevers

“George Packer serves us the history of our own life and times in a magisterial look at the America we lost.” —Lawrence Wright, Pulitzer Prize–winning author of The Looming Tower and Going Clear

“The hearts and lives broken in this second great depression have now found their eloquent voice and fierce champion in George Packer. The Unwinding is an American tragedy and a literary triumph.” —David Frum, author of Comeback and Why Romney Lost

“As with George Orwell's, each of George Packer's sentences carries a pulse of moral force. The Unwinding is a sweeping and powerful book that everyone should read.” —David Grann, author of The Lost City of Z

“George Packer is a modern-day George Orwell . . . The places he writes about are never stages for personal or ideological heroism. They are always real and full of frustrating facts that expose both liberal and conservative absolutism as reckless attempts to deny reality.” —Jed Lipinski, The Village Voice on George Packer