The Blue Zones American Kitchen: 100 Recipes to Live to 100 (Hardcover) 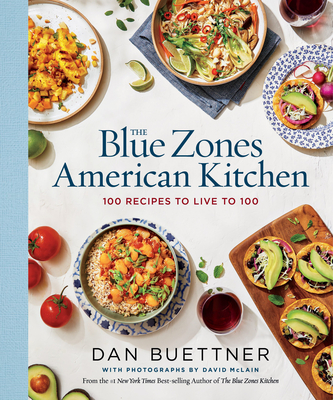 
Best-selling Blue Zones Kitchen author Dan Buettner spent years uncovering the Blue Zones--the five places around the world where people consistently live to or past, 100--and sharing lifestyle tips and recipes gleaned from these places. Now, creating your own Blue Zone at home is easier than ever, thanks to plant-forward recipes in this inspiring book--all developed right in our own backyard.

In Blue Zones American Kitchen, Buettner uncovers the traditional roots of plant-forward cuisine in the United States. Following the acumen of heritage cooks who have passed their recipes from generation to generation, Buettner uncovers the regions and cultures that have shaped America’s healthiest food landscapes, from Hmong elders living in Minnesota to Quakers in New England. Along the way, he illuminates both traditional and revolutionary ideas in vegetarian food with recipes from chefs like executive chef James Wayman, “the Gullah chef” Bill Green, and “the Cod Chef” Dave Smoke-McCluskey.

With wisdom from more than 50 food experts, chefs, and cooks around the country, Buettner’s road trip across America sheds light on some of its most under-recognized plant-forward communities as Buettner shares the ingredients, recipes, and lifestyle tips that will make living to 100 both delicious and easy. And the proof is in the pudding: 49 Blue Zones Project Cities have demonstrated that eating the Blue Zones way can alleviate obesity, heart disease, diabetes, and more.


Dan Buettner is a National Geographic Explorer, a writer, and the founder of Quest Network, Inc. His 2005 cover story for National Geographic magazine, "Secrets of Living Longer," was a finalist for the National Magazine Award. He has appeared on CNN, David Letterman,Good Morning America,Primetime Live, and the Today show to discuss his Blue Zones research, and he has delivered more than 500 keynote speeches over the last 10 years. He is the author of the best-selling Blue Zones Kitchen, as well as The Blue Zones, The Blue Zones Solution, and The Blue Zones of Happiness. He splits his time between California and Minnesota, where you can also find two of the original Blue Zones Project Cities.