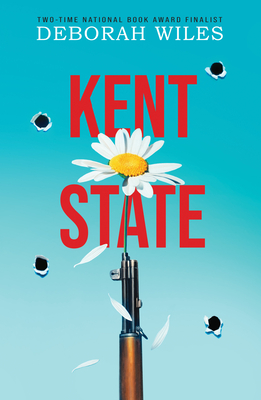 From two-time National Book Award finalist Deborah Wiles, a masterpiece exploration of one of the darkest moments in our history, when American troops killed four American students protesting the Vietnam War.
May 4, 1970.

As protestors roil the campus, National Guardsmen are called in. In the chaos of what happens next, shots are fired and four students are killed. To this day, there is still argument of what happened and why.

Told in multiple voices from a number of vantage points -- protestor, Guardsman, townie, student -- Deborah Wiles's Kent State gives a moving, terrifying, galvanizing picture of what happened that weekend in Ohio . . . an event that, even 50 years later, still resonates deeply.

Deborah Wiles is the author of the picture book Freedom Summer and the novels: Love, Ruby Lavender; The Aurora County All-Stars; and Each Little Bird That Sings, a National Book Award finalist, and A Long Line of Cakes. She is also the author of the documentary novels Countdown and Revolution, a National Book Award Finalist, and Anthem. She has vivid memories of ducking and covering under her school desk during air-raid drills at the time of the Cuban Missile Crisis. She also sang in the Glee Club, was a champion speller, and hated Field Day. Deborah lives in Atlanta, Georgia. You can visit her on the web at deborahwiles.com.

Praise for Kent State:
* "The format effectively captures the pain, confusion, and conflicting perspectives of the time while also making direct connections to current acts of gun violence and governmental overreach." -- The Horn Book, starred review

* "The tangle of voices is stunningly realized." -- BCCB, starred review

* "Brings a visceral energy to the events of the tragedy. In her account, Wiles implicitly challenges her readers to find parallels between then and now and, in so doing, does a service to history. An important book not to be missed." -- Booklist, starred review

Praise for Countdown (The Sixties Trilogy #1):
* "Wiles skillfully keeps many balls in the air, giving readers a story that appeals across the decades as well as offering enticing paths into the history." --