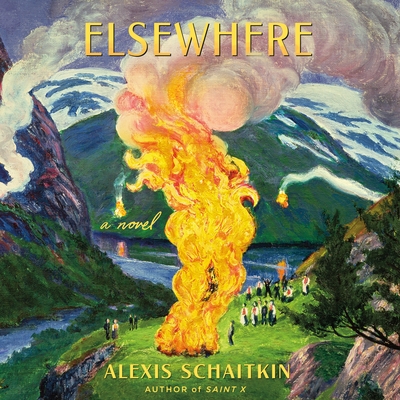 Vera is a girl, and later a mother, in an isolated mountain town where mothers mysteriously vanish overnight, after which the community holds a ritual and the mother is erased from memory. When Vera feels herself “going,” she flees Elsewhere to escape her fate, but her bonds to her daughter draw her home. She returns only to find that she has become a stranger. A poignant rumination on motherhood and identity with a fable-like quality. Hard to put down and impossible to stop thinking about.

“Timeless! Beautifully haunting! All of the comparisons are apt — this is a modern day ‘The Lottery’ penned in gorgeous prose, with an underlying mystery that is a thrill to untangle.”
— Chelsea Berry, Bull Moose, Portland, ME

Richly emotive and darkly captivating, with elements of Shirley Jackson’s “The Lottery” and the imaginative depth of Margaret Atwood, Elsewhere by Alexis Schaitkin conjures a community in which girls become wives, wives become mothers and some of them, quite simply, disappear.

Vera grows up in a small town, removed and isolated, pressed up against the mountains, cloud-covered and damp year-round. This town, fiercely protective, brutal and unforgiving in its adherence to tradition, faces a singular affliction: some mothers vanish, disappearing into the clouds. It is the exquisite pain and intrinsic beauty of their lives; it sets them apart from people elsewhere and gives them meaning.

Vera, a young girl when her own mother went, is on the cusp of adulthood herself. As her peers begin to marry and become mothers, they speculate about who might be the first to go, each wondering about her own fate. Reveling in their gossip, they witness each other in motherhood, waiting for signs: this one devotes herself to her child too much, this one not enough—that must surely draw the affliction’s gaze. When motherhood comes for Vera, she is faced with the question: will she be able to stay and mother her beloved child, or will she disappear?

Provocative and hypnotic, Alexis Schaitkin’s Elsewhere is at once a spellbinding revelation and a rumination on the mysterious task of motherhood and all the ways in which a woman can lose herself to it; the self-monitoring and judgment, the doubts and unknowns, and the legacy she leaves behind.

Alexis Schaitkin is the author of Saint X. Her short stories have been anthologized in The Best American Short Stories and The Best American Nonrequired Reading. She received her MFA in fiction from the University of Virginia, where she was a Henry Hoyns Fellow. She lives in Williamstown, Massachusetts, with her husband and their two children.