The Lincoln Conspiracy: The Secret Plot to Kill America's 16th President--and Why It Failed (CD-Audio) 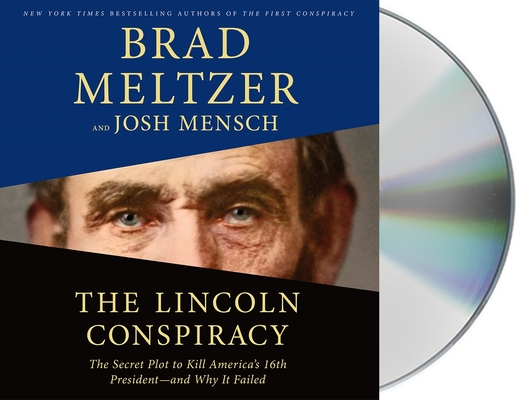 "Everyone knows that Abraham Lincoln was assassinated, but how many know that there was a previous, unsuccessful attempt on his life? Let narrator Scott Brick tell you all about it...Brick can make a nursery rhyme sound exciting, and he's on fire in this audiobook." -- AudioFile Magazine

The bestselling authors of The First Conspiracy, which covers the secret plot against George Washington, now turn their attention to a little-known, but true story about a failed assassination attempt on President Lincoln

Everyone knows the story of Abraham Lincoln’s assassination in 1865, but few are aware of the original conspiracy to kill him four years earlier in 1861, literally on his way to Washington, D.C., for his first inauguration. The conspirators were part of a pro-Southern secret society that didn’t want an antislavery President in the White House. They planned an elaborate scheme to assassinate the brand new President in Baltimore as Lincoln’s inauguration train passed through en route to the Capitol. The plot was investigated by famed detective Allan Pinkerton, who infiltrated the group with undercover agents, including one of the first female private detectives in America. Had the assassination succeeded, there would have been no Lincoln Presidency, and the course of the Civil War and American history would have forever been altered.

"The Lincoln Conspiracy is, despite its dark subject matter, relentlessly fun to read...It's an expertly crafted book that seems sure to delight readers with an interest in lesser-known episodes of American history." -- NPR.org

"Filled with amazing American history, secret societies, incredible research, and a shocking conspiracy to murder Abraham Lincoln at the dawn of his presidency. A brilliant combination of edge of your seat history and superb storytelling."-- James L. Swanson, bestselling author of Manhunt: The 12-Day Chase for Lincoln’s Killer
"Meltzer and Mensch maintain suspense despite the known outcome of the story, and convincingly counter claims that Pinkerton made the whole thing up for publicity purposes. Readers new to the “Baltimore Plot” will appreciate this comprehensive and well-written overview." -- Publishers Weekly

BRAD MELTZER is the #1 New York Times bestselling author of The Escape Artist, The Inner Circle, and many other bestselling thrillers, as well as the "Ordinary People Change the World" series. He is also the host of the History Channel TV shows Brad Meltzer’s Decoded and Brad Meltzer’s Lost History, which he used to help find the missing 9/11 flag that the firefighters raised at Ground Zero.

JOSH MENSCH is a New York Times bestselling author and documentary television producer with a focus on American history and culture. He is coauthor with Brad Meltzer of The First Conspiracy: the Secret Plot to Kill George Washington. For television he has written, directed, and been a showrunner on nonfiction series for PBS, the History Channel, National Geographic, and many other networks. He lives in Brooklyn, NY with his wife and children.