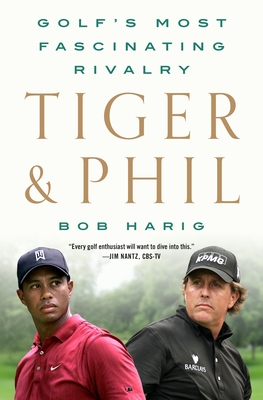 For more than two decades, there have been two golfers who have captivated, bemused, inspired, frustrated, fascinated, and entertained us, and in doing so have demanded our attention – Tiger Woods and Phil Mickelson. Even with all the ink that has been spilled on Tiger, no one has ever written about his relationship with Phil and how their careers have been inextricably intertwined. Furthermore, very little has been written about Phil Mickelson, who is more than just an adversary. He is a fascinating Hall of Fame golfer in his own right.

These two biggest names (and draws) in golf have, for better and for worse, been the ultimate rivals. But it is so much more complicated than that. Each player has pushed the other to be better. They have teased each other and fought. They have battled to the bitter end on the course making for some of the greatest moments in the game for the last 20 years. They have each gone through injury and health problems, legal problems, falling in and out of favor with the press. And over the course of their time together in the game they have gradually become not just rivals but friends.

In the tradition of major bestsellers such as Arnie & Jack, When the Game Was Ours, The Rivals, and Brady vs. Manning, Tiger & Phil will change the way we look at these players and the game itself.

SI.com golf writer BOB HARIG, a longtime writer for ESPN and the Tampa Bay Times, has covered Tiger and Phil since the very beginning of each of their careers and has had dozens of one-on-one interviews with each of them. He holds degrees in journalism and history from Indiana University and is an active member of the Golf Writers Association of America (GWAA). He lives in Florida.

“The only thing I enjoyed more than broadcasting the Tiger-Phil rivalry for over twenty years was reading all the juicy tidbits from behind the scenes by the amazing Bob Harig. Every golf enthusiast will want to dive into this.” —Jim Nantz, CBS-TV

"Bob Harig was born to write this brilliant and definitive historical document on the Tiger-Phil rivalry. After walking step for step with these two titans for decades, Harig delivers fascinating, previously-untold stories about the battles that defined them. This is the ultimate insider's look at the real Tiger-Phil relationship, and at the high-stakes pursuit of golf immortality." —Ian O'Connor, three-time New York Times bestselling author of Arnie & Jack

“In many ways golf has never had a rivalry to match Tiger and Phil’s. Tiger was a perfectionist and an icy star much like Ted Williams, and he always had that hard cold stare of high purpose. Phil was golf’s version of the Leaning Tower of Pisa, creating awe from error, and he always had that paw-in-the-cookie-jar smile. They weren’t so much oil and water as they were thesis and antithesis. Bob Harig writes a book we all want to read as much as we all wanted to watch them play.’’ —Brandel Chamblee, Golf Channel analyst, former PGA Tour player and author of Anatomy of Greatness: Lessons From the Best Golf Swings in History

"Tiger vs. Phil is the most delicious rivalry in sports, and Harig has been there for all of it. There's so much good stuff in here, somebody should make a movie." —Rick Reilly, former Sports Illustrated and ESPN writer and author of So Help Me Golf and Who’s Your Caddy?

"There is no one more qualified to write a book on Tiger and Phil than Bob Harig. He's probably walked more holes with them than anyone—with the POSSIBLE exception of their caddies—and been around for every important moment in their careers—both with one another and separately." —John Feinstein, author of A Good Walk Spoiled, The Majors, and Raise a Fist, Take a Knee