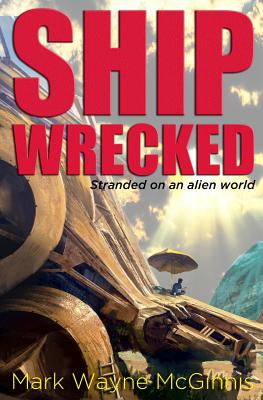 A wicked snowstorm had blown in from the north and the roads were a mess. Split from his one-time girlfriend, there was now nothing holding Cameron Decker here in this little backwater mountain town. Time to get back to college, back to Stanford. Seeing a guy knee-deep in slush at the side of the road, he pulled to the curb and waved him over. The stranger smacked his head getting in-knocked his watch cap askew. Only then did Cameron notice-notice that the stranger couldn't possibly be human. Along with his rust-bucket of a pickup truck, Cameron is soon heading deep into space aboard an interstellar spacecraft. Crashlanding onto an alien world, he'll have to contend with a murderous droid and a slew of strange alien life forms. But it is the forty-five-foot tall beast-a Minal Loth-that will impact his life the most. Marooned, somehow, Cameron must survive long enough to find a way to return home-back to that little mountain town, and the girl, whom he should never have left in the first place. Reviews: Thrilling Scifi Story
I have read many of Mr. McGinnis' books and I found this one to be one of his best. It grabs you and does not let go. I couldn't put it down. When I was reading it, it was the first thing that I picked up in the morning, and I've read it many times. I would recommend it to anyone who likes exciting, fun science fiction. I do hope the story continues. Well worth the money, and highly recommended -Dilligaf Fantastic adventure science fiction
Helping a lone man walking along a road in a winter storm, Cam was thrust into the greatest adventure he could imagine. Barely introduced to the spaceship before his new friend dies by the tentacles of a ravenous beast that escapes onto Earth. And the ship takes off, leaving Cam at the mercy of a damaged droid. The droid manages to crash land on a strange planet. Another of those beasts, a Loth, escapes the ship. Then the droid feels threatened by Cam and kicks him out onto the dangerous planet. Most of the indigenous animals see Cam as lunch. But the Loth imprints on Cam and protects him. Then the local "apes," rather than being the killers he'd been told, take a shine to him, one female in particular. Now Cam has an army that eventually takes the ship back and gets rid of the droid. But the Loth left on Earth has not only been eating people but also breeding. As only the US government can do, they drop a nuke on the town, which of course does not kill the beast. Cam tries to get his Loth to convince the other to come aboard and vacate Earth. Then Cam hears from his girlfriend... Mr. McGinnis, I would like more if you feel like revisiting this story.-Nancy W. Mark McGinnis never disappoints
I really love Mark McGinnis' work, ever since Scrapyard Ship. While not overly complex or convoluted, it delivers the goods without a lot of over- embellishment. If you're looking for the meaning of life, this is probably not for you, but if you're into fun SciFi with cool alien creatures, amazing technology, and leading characters that you can bond with, then read on. I've read his entire Scrapyard Ship series and this one follows a similar model (spacecraft on present-day Earth and interesting character who gets involved with it). The main space monster is awe-inspiring, but there's a significant twist. I also like that the book stands alone and while there probably will be a sequel, you're not left hanging. It has an ending. I'm going to get my granddaughter to see if she can do a drawing of the creature based on Mark's description. That could be fun.-Myles Marcovitch Ship Wrecked / Another great sci-fi book
This will always be one of my favorites. Great story and very well written. I read it in one sitting not being able to put it down I would love another follow-up if at all possible. Keep up the great work -GMZ