Dogs Are Better Than People: Encountering Good and Evil in the Animal Rescue World (Paperback) 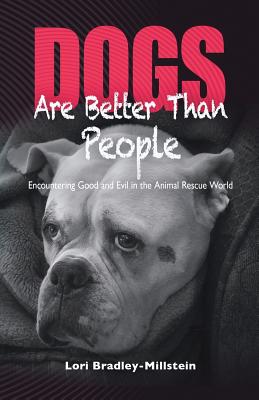 Dogs Are Better Than People is the story of one woman's transformation from armchair sympathizer to animal activist. Powerful, fun and humorous; it is part memoir, undercover report and love letter to companion animals everywhere. During one difficult year, Lori Bradley-Millstein's parents became terminally ill, she found herself in yet another new town after years of relocating for jobs with a busy husband often away at work and without any family nearby. Then, suddenly, her favorite dog passed away. Suddenly, Lori became deeply and profoundly depressed. In searching for a way out of paralyzing sadness and isolation she turned to her first love - companion animals. She began a 10-year adventure as a volunteer at urban no-kill animal shelters and rescues, beginning as an idealistic innocent and learning through experience that rescue is complicated and morally challenging. She overcame her shyness to take on those who, sometimes in the guise of helpers, seek to harm animals for profit. A remarkable group of animal activist friends accompanied Lori in her rescue journey, eventually encouraging her to put down roots in her new community and becoming a second family. Millions of unwanted animals die in shelters every year. This story is for them and the many compassionate people who work relentlessly to save them.