A Train Near Magdeburg: A Teacher's Journey into the Holocaust, and the reuniting of the survivors and liberators, 70 years on (Paperback) 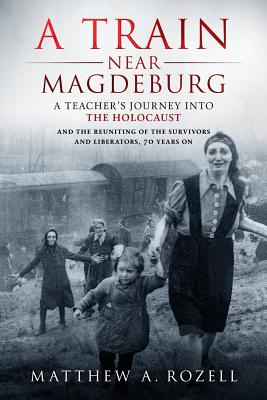 What do you do if you are a reluctant soldier, having been shot at, seen your friends killed, and can no longer even remember what your own mother looks like? As a combat soldier fighting your way across Europe, what is the plan when you come across a Holocaust train full of suffering humanity that shocks you to your core, even after you think you have seen it all? And what happens when you get to meet the survivors face to face, two generations later?

'After I got home I cried a lot. My parents couldn't understand why I couldn't sleep at times.'-Walter 'Babe' Gantz, US Army medic

In this book, the true story behind an iconic photograph taken at the liberation of a DEATH TRAIN deep in the heart of Nazi Germany―brought to life by the history teacher who discovered it, and went on to reunite HUNDREDS of Holocaust survivors with the actual American soldiers who saved them

'I grew up and spent all my years being angry. This means I don't have to be angry anymore.'-Paul Arato, Holocaust Survivor

THE HOLOCAUST was a watershed event in history. Drawing on never-before published eye-witness accounts, survivor testimony and memoirs, wartime reports and letters, Matthew Rozell takes us on his journey to uncover the stories behind the incredible 1945 liberation photographs taken by the soldiers who were there. He weaves togethera chronology of the Holocaust as it unfolds across Europe and goes to the authentic sites of the Holocaust to retrace the steps of the survivors and the American soldiers who freed them. His mission culminates in joyful reunions on three continents, seven decades later. Rozell offers his unique perspective on the lessons of the Holocaust for future generations, and the impact that one person, a teacher, can make.

'I survived because of many miracles. But for me to actually meet, shake hands, hug, and cry together with my liberators―the 'angels of life' who literally gave me back my life―was just beyond imagination.'-Leslie Meisels, Holocaust Survivor

-Featuring testimony from 15 American liberators and over 30 Holocaust survivors
-73 photographs and illustrations, many never before published
-10 custom maps
-502 pages-extensive notes and bibliographical references

'People say it cannot happen here in this country; yes, it can happen here. I was 21 years old. I was there to see it happen '-Luca Furnari, US Army

'It's not for my sake, it's for the sake of humanity, that you] will remember.'-Steve Barry, Holocaust Survivor