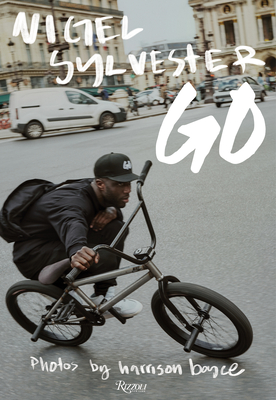 Inspired by his globally acclaimed digital series GO, which documents the Queens, NY native’s ambitious desire to ride his bicycle around the world, the two hundred-plus page coffee table book (out this October with Rizzoli) transports audiences to marquee cities worldwide, placing them in the front seat to various thrill-seeking moments documented through dynamic photos and short stories including sumo wrestling in Tokyo, fencing at Somerset House in London, racing Ferraris along the Malibu coast, and jumping out of a plane with his BMX bike in hand into the Dubai desert, just to name a few. Unprecedented moments like this make it easy to understand how the BMX icon's ubiquitous influence has redefined the sport on his terms and become one of the most recognizable faces in the sports world.

Nigel Sylvester is an American professional BMX athlete. He is best known for his progressive bicycling skills as well as his digital content featuring his unique BMX stunts and adventures around the globe.
Harrison Boyce is a photographer and director based in New York City.

"Nigel Sylvester is a pioneer of the BMX scene, and now his ongoing legacy is being celebrated in his upcoming coffee table book, Nigel Sylvester: GO by Rizzoli. The photobook captures his energetic approach to the sport, exploring how he has turned BMXing from a hobby into career and, most importantly, a lifestyle. From cycling around his home of Queens, New York, to jumping out of a plane in the Dubai desert with his trusty bicycle in hand, Sylvester has gone on to prove that BMXing can be a true sport, eschewing negative connotations by celebrating the medium’s freedom. With photography by the director, cinematographer, and graphic designer Harrison Boyce, Nigel Sylvester: GO sees the professional athlete not just in his usual form, but also in a multitude of situations that better explain his travels and effervescent energy." —HYPEBEAST.COM

"Nigel Sylvester: GO, a photography book out Oct. 11 from Rizzoli, features more than 200 pages of Sylvester and his trips around the world, which were taken by photographer and cinematographer Harrison Boyce... the collection features cameos from celebrities such as A$AP Ferg, former NBA player Nick Young and Super Bowl XLVI champion Victor Cruz. But between the famous faces and places featured on the book's pages, Sylvester — who also runs the Nigel Sylvester Foundation with the goal of donating thousands of bikes to underprivileged youth — hopes the images inspire more people to take up riding." —PEOPLE

"Nigel Sylvester is a professional BMX athlete who has become a social media star and cultural icon. [For this book, photographer Harrison] Boyce followed him around the world and shot photos of the young star as he worked and played — and even jumped out of a plane with his bike." —BOOK RIOT