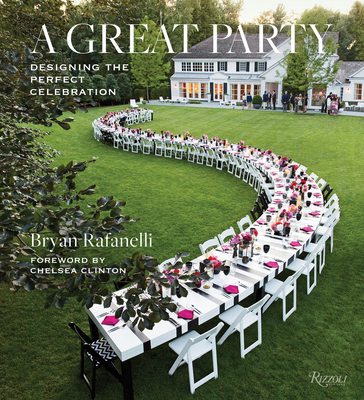 By Bryan Rafanelli, Chelsea Clinton (Foreword by)
$55.00
On Our Shelves; Typically Ships in 1 - 2 Days

Voted one of the top wedding designers in the world by Vogue, Bryan Rafanelli has designed and produced some of the nation's most exclusive and high-profile events, including many for President Obama at the White House as well as Chelsea Clinton's wedding. In his first book, Rafanelli shares his philosophy for creating artful celebrations that convey beauty and elegance while telling a story unique to its hosts. From a seaside destination wedding to a stylish masquerade fete, Rafanelli's work is marked by stunning statements and clever everyday details.

The book opens with key Rafanelli principles to hosting great celebrations, from considering a room's surfaces--the floor, walls, and ceiling--to how adding guests will change what you see. He shares his thoughts on the importance of enhancing what's already part of a space rather than obscuring it, as when he enclosed the gilded mirrors of the East Room in the White House in twelve-foot frames of fresh flowers for a state dinner under President Obama. Part two of the book explores dozens of events in greater detail. Rafanelli takes readers behind the scenes in sections such as Weddings, showcasing both the main event and the welcome and after parties; Charity Events, highlighting what makes one unique and successful; and the White House, featuring state dinners and holiday decor.

Bryan Rafanelli launched Rafanelli Events in 1996 as a three-person operation, executing only a handful of events a year. It has quickly evolved into a full-service event design, strategy, planning, and production company with more than 100 events annually in venues around the world. Rafanelli Events has offices in New York City, Boston, and Palm Beach.
Chelsea Clinton is the vice chair of the Clinton Foundation and the author of several best-selling books

"This first book from event designer extraordinaire Bryan Rafanelli—he's created events for movie stars, society titans, and heads of state—shares some of his most memorable projects as well as advice for amateur entertainers on throwing their own unforgettable soirées. Don't believe us? Ask Chelsea Clinton, a Rafanelli client and fan who wrote the book's intro." —TOWN & COUNTRY

"With a foreword from Chelsea Clinton, Bryan Rafanelli's A Great Party is an event-planner's debut that belongs on your bookshelf. A must-read for anyone who dreams of being the dinner party host of their friend group, this book will show you how to put together unforgettable events that range from ultra-casual to glam and grand. No matter where on this spectrum your Friendsgiving falls, you're going to find something to love in A Great Party." —BUSTLE

"Whether you’re actually planning a big do or just a fan of gorgeous photos and luxurious party decorations, this book is a visual feast that would also make a great gift for the party planner in your life." —SURROUNDINGS

"Powerhouse event planner Bryan Rafanelli masterminded the holiday decor for President Obama's White House and even organized Chelsea Clinton's wedding. Now you can throw a POTUS-worthy fete of  your own, courtesy of his new title which reveals his best-kept secrets for conjuring memorably elegant celebrations that spin a personal yarn." —GALERIE MAGAZINE

"His first book, aptly and simply titled A Great Party, is a window into the world of designing such grand affairs." —GUEST OF A GUEST

"Grand celebrations are the forte of event planner to the very A-list Bryan Rafanelli. In his first book A Great Party, Rafanelli invites us to the parties and events he has orchestrated in palaces, museums, historied family estates and island getaways." —FORBES.COM

"Want to know what it’s like to work with Hillary Clinton, party with Elton John, or save a Turkish wedding from a hailstorm? Boston’s own events impresario to the stars finally tells all." —BOSTON MAGAZINE