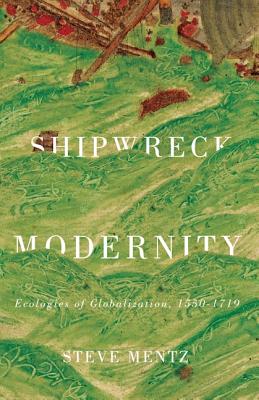 By Steve Mentz
Email or call for price.
Special Order

Shipwreck Modernity engages early modern representations of maritime disaster in order to describe the global experience of ecological crisis. In the wet chaos of catastrophe, sailors sought temporary security as their worlds were turned upside down. Similarly, writers, poets, and other thinkers searched for stability amid the cultural shifts that resulted from global expansion. The ancient master plot of shipwreck provided a literary language for their dislocation and uncertainty.

Steve Mentz identifies three paradigms that expose the cultural meanings of shipwreck in historical and imaginative texts from the mid-sixteenth through the early eighteenth centuries: wet globalization, blue ecology, and shipwreck modernity. The years during which the English nation and its emerging colonies began to define themselves through oceangoing expansion were also a time when maritime disaster occupied sailors, poets, playwrights, sermon makers, and many others. Through coming to terms with shipwreck, these figures adapted to disruptive change.

Traces of shipwreck ecology appear in canonical literature from Shakespeare to Donne to Defoe and also in sermons, tales of survival, amateur poetry, and the diaries of seventeenth-century English sailors. The isolated islands of Bermuda and the perils of divine anger hold central places. Modern sailor-poets including Herman Melville serve as valuable touchstones in the effort to parse the reality and understandings of global shipwreck.

Steve Mentz is professor of English at St John’s University in New York City. He is author of At the Bottom of Shakespeare’s Ocean and Romance for Sale in Early Modern England: The Rise of Prose Fiction.

"Mentz has shaped an account that looks poised to become a key ecocritical text in the years to come."—Glasgow Review of Books

"This is a remarkable and valuable scholarly work that offers much beyond its analysis of early modern texts and histories."—Renaissance Quarterly

"A thoughtful exploration of the modalities of how and why culinary practices and tastes changed over time."—Comitatus 48

"Shipwreck Modernity offers useful challenges to early modernists to re- think our periodization schemes, to environmental historians to more fully consider the ocean, and to all readers to ponder how to stay afloat amidst our ecological crises."—Journal of Early Modern History