Who Is Rich?: A Novel (Paperback) 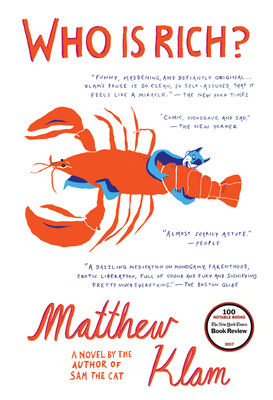 By Matthew Klam
Email or call for price.
Special Order

A provocative satire of love, sex, money, and politics that unfolds over four wild days in so-called “paradise”—the long-awaited first novel from the acclaimed author of Sam the Cat

Every summer, a once-sort-of-famous cartoonist named Rich Fischer leaves his wife and two kids behind to teach a class at a weeklong arts conference in a charming New England beachside town. It’s a place where, every year, students—nature poets and driftwood sculptors, widowed seniors, teenagers away from home for the first time—show up to study with an esteemed faculty made up of prizewinning playwrights, actors, and historians; drunkards and perverts; members of the cultural elite; unknown nobodies, midlist somebodies, and legitimate stars—a place where drum circles happen on the beach at midnight, clothing optional.

LONGLISTED FOR THE CENTER FOR FICTION FIRST NOVEL PRIZE

Matthew Klam is the author of the acclaimed short story collection Sam the Cat. He is a recipient of a Guggenheim Fellowship, a PEN/Robert W. Bingham Prize, a Whiting Award, and a National Endowment for the Arts grant. His writing has been featured in publications including The New Yorker, Harper’s, GQ, The New York Times Magazine, The O. Henry Prize Stories, The Best American Nonrequired Reading, and The Ecco Anthology of Contemporary American Short Fiction.

“An irresistible comic novel . . . In paragraphs that flow like conversation with a witty, troubled friend, Klam captures Rich’s squirrelly consciousness, swinging from lust to despair, turning his comic eye on others and then on himself.”—The Washington Post

“Superb . . . Like all great humorists, Klam is a sharp observer and he skewers his targets here with specificity and brio.”—Maureen Corrigan, Fresh Air

“In 2000, Matthew Klam was the literary equivalent of Rookie of the Year, publishing Sam the Cat, a collection of stories that prompted The New Yorker to call him one of the top twenty writers under forty. Now, finally, we have the novel Klam’s fans hoped he had in him. . . . It’s both bleak and joyous, creeping between the isolation of a f***less marriage and the elusive thrill of the affair.”—Men’s Journal

“Rich is a hard man to like, but he makes you laugh.”—NPR

“It’s amazing to wait so long for a book, and for it to be everything you wanted. The most singular quality of Matthew Klam’s writing is how alive it is. I loved every page of this book. It got into my bloodstream—and kind of destroyed me.”—Curtis Sittenfeld

“I’ve been eagerly awaiting another book by Matthew Klam—and here it is, and it’s a stunner. This, his first novel, is funny, dark, big, and bold. I read it straight through, with great pleasure and awe at all he knows about art, money, family, sex, kids, mortality, and shame. Who Is Rich? is not to be missed.”—Meg Wolitzer

“Matthew Klam is a brilliant satirist and keen observer of Unequal America, and his new novel takes a hard look at society’s extravagant hypocrisies. His work is thrilling and distinctive—and political in a way that is not always noted because it is also so funny. Who Is Rich? is long-awaited and first-rate.”—Lorrie Moore

“I just finished Matthew Klam’s Who Is Rich? and I seriously, deeply love this book.”—Michael Cunningham