Travels with a Tangerine: From Morocco to Turkey in the Footsteps of Islam's Greatest Traveler (Paperback) 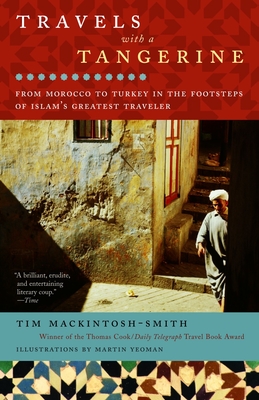 In 1325, the great Arab traveler Ibn Battutah set out from his native Tangier in North Africa on pilgrimage to Mecca. By the time he returned nearly thirty years later, he had seen most of the known world, covering three times the distance allegedly traveled by the great Venetian explorer Marco Polo—some 75,000 miles in all.

Captivated by Ibn Battutah’s account of his journey, the Arabic scholar and award-winning travel writer Tim Mackintosh-Smith set out to follow in the peripatetic Moroccan’s footsteps. Traversing Egyptian deserts and remote islands in the Arabian Sea, visiting castles in Syria and innumerable souks in medieval Islam’s great cities, Mackintosh-Smith sought clues to Ibn Battutah’s life and times, encountering the ghost of “IB” in everything from place names (in Tangier alone, a hotel, street, airport, and ferry bear IB’s name), to dietary staples to an Arabic online dating service— and introducing us to a world of unimaginable wonders.

By necessity, Mackintosh-Smith’s journey may have cut some corners (“I only wish I had the odd thirty years to spare, and Ibn Battutah’s enviable knack of extracting large amounts of cash, robes and slaves from compliant rulers.”) But in this wry, evocative, and uniquely engaging travelogue, he spares no effort in giving readers an unforgettable glimpse into both the present-day and fourteenth-century Islamic worlds.

Tim Mackintosh-Smith studied classical Arabic at Oxford. At the age of twenty-one, like Ibn Battutah, he headed east for the real Arabia. His first book, Yemen: The Unknown Arabia, won the Thomas Cook/Daily Telegraph Travel Book Award and was a New York Times Notable Book.

Martin Yeoman is a painter, draughtsman, sculptor, and etcher whose work can be found in a number of notable British collections, including those of HM the Queen and HRH the Prince Wales.

“A thoughtful work of an intensely curious scholar who can write better than most novelists.”
—The New York Times Book Review

“Intoxicating, dazzlingly erudite, yet full of gentle wit and informed by its author’s profound knowledge of Muslim society, this book is a breathtaking achievement.”
—Sunday Times (London)