Up from Zero: Politics, Architecture, and the Rebuilding of New York (Paperback) 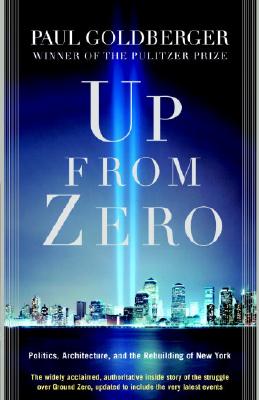 By Paul Goldberger
Email or call for price.
Special Order

In Up from Zero, Paul Goldberger, winner of the Pulitzer Prize, tells the inside story of the quest to rebuild one of the most important symbolic sites in the world, the sixteen acres where the towers of the former World Trade Center stood. A story of power, politics, architecture, community, and culture, Up from Zero takes us inside the controversial struggle to create and build one of the most challenging urban-design projects in history.

What should replace the fallen towers? Who had the courage and vision to rise to the task of rebuilding? Who had the right, finally, to decide? The struggle began soon after September 11, 2001, as titanic egos took sides, made demands, and jockeyed for power. Lawyers, developers, grieving families, local residents, politicians, artists, and architects all had fierce needs, radically different ideas, strong emotions, and boundless determination. How could conflicting interests be resolved? After hundreds of hours of often rancorous meetings, the first sets of plans were finally revealed in the summer of 2002–and the results were staggeringly disappointing.

Yet, as Goldberger shows, the rebuilding process recovered and began to flourish. Rather than degenerating into turf wars, it evolved in ways that no one could have predicted. From the decision to reintegrate the site into the dense fabric of lower Manhattan, to the choice of Daniel Libeskind as master planner, to the appointment of a memorial jury, the process has been marked by moments of bold vision, effective community activism, and personal instinct, punctuating the often contentious politics of public participation.
Up from Zero takes in the full sweep of this tremendous effort. Goldberger presents a drama of creative minds at work, solving seemingly insurmountable clashes of taste, interests, and ideas. With unique access to the players and the process, and with a sophisticated understanding of architecture and its impact on people and on the social and cultural life of a city, Paul Goldberger here chronicles the courage, the sacrifices, and the burning passions at the heart of one of the greatest efforts of urban revitalization in modern times.

Architectural critic for The New Yorker since 1997, PAUL GOLDBERGER spent more than twenty-five years at The New York Times, where he won the Pulitzer Prize. He is the recipient of numerous other awards, including the Medal of the American Institute of Architects. He is the author of several books, including The City Observed; The Skyscraper; On the Rise: Architecture and Design in a Postmodern Age; Houses of the Hamptons; Above New York; The World Trade Center Remembered; and, with Matteo Pericoli, Manhattan Unfurled. He appears frequently on film and television to discuss art, architecture, and cities, most recently in Ric Burns’s epic New York: A Documentary Film, and in Ken Burns and Lynn Novick’s Frank Lloyd Wright. He has taught at Yale and the University of California, Berkeley, and is currently dean of Parsons School of Design.

“Paul Goldberger is America's foremost interpreter of public architecture, and it is hard to imagine an architectural project more important to Americans than the one his latest book describes. It is a fraught and fascinating tale, and very nicely told.” -Tracy Kidder