Hip Hop Matters: Politics, Pop Culture, and the Struggle for the Soul of a Movement (Paperback) 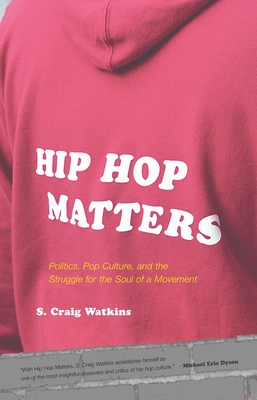 Avoiding the easy definitions and caricatures that tend to celebrate or condemn the "hip hop generation," Hip Hop Matters focuses on fierce and far-reaching battles being waged in politics, pop culture, and academe to assert control over the movement. At stake, Watkins argues, is the impact hip hop has on the lives of the young people who live and breathe the culture. He presents incisive analysis of the corporate takeover of hip hop and the rampant misogyny that undermines the movement's progressive claims. Ultimately, we see how hip hop struggles reverberate in the larger world: global media consolidation; racial and demographic flux; generational cleavages; the reinvention of the pop music industry; and the ongoing struggle to enrich the lives of ordinary youth.

S. Craig Watkins is associate professor of radio-TV-film, sociology, and African American Studies at the University of Texas, Austin. He lives in Austin, Texas.

Watkins wisely chooses to focus on what has not been said . . . [and] tells his version of hip-hop's history in lyrical prose, often mirroring the rhythms and wordplay of the music he's discussing. This is undoubtedly a book for fans, but it is also an intriguing look at how hip-hop has become part of a universal cultural conversation. -Publishers Weekly

"Offering a fast-moving and well-researched book, Watkins successfully unearths some of the disturbing and encouraging implications of hip-hop culture." -Library Journal

"Quite an exposition of all things hip-hop." -Mike Tribby, Booklist

"Watkins sets his tome apart with a meticulous attention to the facts . . . He leaves few stones unturned examining the endless influence of hip-hop on the world around us, always with a critical eye."--URB

"Watkins's study is the best yet on the hip-hop industry. Watkins has provided nothing less than a political economy of hip-hop, one that doesn't shy away from the dirty business hip-hop has become . . . He's also attentive to the way hip-hop was affected by the appalling rates of incarceration and AIDS in black communities." --Greg Tate, The Nation

"With Hip Hop Matters, S. Craig Watkins establishes himself as one of the most insightful observers and critics of hip hop culture."--Michael Eric Dyson