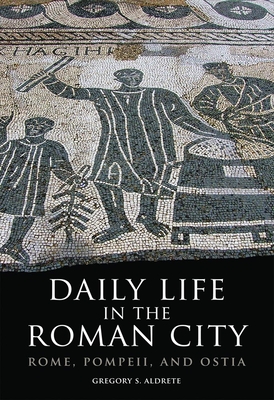 By Gregory S. Aldrete
Email or call for price.

Although most Romans lived outside urban centers, the core of Roman civilization lay in its cities. Throughout the empire these cities--modeled as they were after Rome--were strikingly alike. In Gregory Aldrete's exhaustive account, readers can peer into the inner workings of daily life in ancient Rome and examine the history, infrastructure, government, and economy of Rome; its emperors; and its inhabitants--their life and death, dangers and pleasures, entertainment, and religion.

Aldrete also shows how Roman cities differed. To accomplish this comparison, in addition to Rome, he explores Ostia, an industrial port town, and Pompeii, the doomed playground of the rich. Daily Life in the Roman City includes a chronology, maps, numerous illustrations, useful appendices (on names, the Roman calendar, clothing and appearance, and construction techniques), a bibliography, and an index.

This volume is ideal for high school and college students and for others wishing to examine the realities of life in ancient Rome.