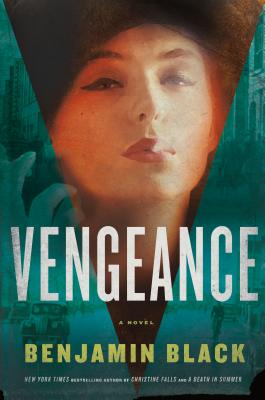 This is book number 5 in the Quirke series.

“If you haven't yet discovered Benjamin Black (a.k.a. John Banville) and his marvelous creation, Dr. Quirke, then you are missing some first-rate writing and entertainment. Vengeance is the fourth in a series set in Dublin in the late 1950s featuring the good doctor, a somewhat grumpy pathologist, and his drinking and sleuthing companion Inspector Detective Hackett. Quirke is a flawed man of many weaknesses, yet he manages to be in a state of permanent self-deprecation that he takes as a sign of virtue, and that makes him an irresistible and believable character.”
— Darwin Ellis, Books on the Common, Ridgefield, CT

A bizarre suicide leads to a scandal and then still more blood, as one of our most brilliant crime novelists reveals a world where money and sex trump everything

It's a fine day for a sail, and Victor Delahaye, one of Ireland's most successful businessmen, takes his boat far out to sea. With him is his partner's son who becomes the sole witness when Delahaye produces a pistol, points it at his own chest, and fires.

This mysterious death immediately engages the attention of Detective Inspector Hackett, who in turn calls upon the services of his sometime partner Quirke, consultant pathologist at the Hospital of the Holy Family. The stakes are high: Delahaye's prominence in business circles means that Hackett and Quirke must proceed very carefully. Among others, they interview Mona Delahaye, the dead man's young and very beautiful wife; James and Jonas Delahaye, his identical twin sons; and Jack Clancy, his ambitious, womanizing partner. But then a second death occurs, this one even more shocking than the first, and quickly it becomes apparent that a terrible secret threatens to destroy the lives and reputations of several members of Dublin's elite.

Why did Victor Delahaye kill himself, and who is intent upon wreaking vengeance on so many of those who knew him?

Benjamin Black is the pen name of the Man Booker Prize-winning novelist John Banville. The author of the bestselling and critically acclaimed series of Quirke novels "Christine Falls," "The Silver Swan," "Elegy for April," and "A Death in Summer" he lives in Dublin."

"Alluring…  The Black books have been lovely and luminous… [They] remain enticing, sultry pleasures." —Janet Maslin, The New York Times

"[Vengeance’s] tartly playful opening is a tour de force, and one typical of Mr. Black, who enjoys confounding readers' expectations…. Vengeance is filled with … enticing sentences, sentences that quietly beckon, promising one thing before flirtatiously turning back and ending unexpectedly. Indeed, language is at the heart of the entire series."—Judith Flanders, The Wall Street Journal

"Benjamin Black…has become a dab hand at certain flourishes of classic genre writing, from the thumbnail character sketch (like one of a rascal who is "charming, dangerous, darkly handsome and given to destructive gaiety") to the single startling image that turns the story on its head (like the vindictive final gesture of a suicidal man). Vengeance… is filled with these vivid daubs."—The New York Times Book Review

"Even the violence in [Black’s] fifth novel, Vengeance, is fun to read… An enjoyable carnival ride."—The New York Review of Books

"Readers with a literary bent who prefer stylish prose and fully-realized characters are in the right hands with Black… Throughout [Vengeance], Black’s prose is vividly rendered, almost painterly in its detail."—The Boston Globe

"There are very few writers who can write elegantly about murder, but there is no question that Benjamin Black is one of them… Quirke is fascinating as the dominant character, a man who remembers too many old, unhappy things and regrets too much, especially an inclination to repeat his mistakes… Readers who embark on the voyage of unraveling this mystery and others it sets in motion will not be disappointed."—The Washington Times

"[Vengeance] focuses on the charismatic, disheveled Quirke, a pathologist and part-time sleuth who solves murders in and around Dublin.… Delahaye's death won't be the last bit of trouble visited upon those in his orbit, but Quirke, dogged if occasionally quite drunk, isn't one to worry when the bodies start dropping."—The San Francisco Chronicle

"There is no definitive solution to the confusion of the heart and soul, particularly in a culture of repressed desire, guilt and hypocrisy, liberally sprinkled with the holy water of alcohol. Like a Beckett character, Quirke is trapped. The mystery of these stylish Black novels is how his hero will escape his fate."—The Cleveland Plain Dealer

"[Black] displays a melancholy poet's touch in Vengeance… The sleuthing here centers on a suicide at sea and a later death, but the absorbed and absorbing Quirke, ‘a great man for a drink,’ is as much concerned with the mystery of his own and others’ existence as he is with solving the crime."—The Wall Street Journal

"As you'd expect from Booker Prize-winning novelist John Banville (here "hiding" as Black), the writing is gorgeous and sleek, 1950s Dublin is richly evoked, and Quirke is captivating — by turns dour and charming, and with an air about him that is catnip to women."—Seattle Times

"If you haven’t yet discovered Benjamin Black (a.k.a. John Banville) and his marvelous creation, Dr. Quirke, then you are missing some first-rate writing and entertainment…Quirke is … an irresistible and believable character."—The Daily News

"Some incautious people may pick up Vengeance for a beach read, but don’t you do it! You must savor the writing. There are no idle moments. Best to hold this one until the summer ends, until you are back at your fireside, the world outside in a slumber lulled by a distant sea, a dollop of Jameson in your glass."—The Washington Independent Review of Books

"John Banville, when he’s not winning the Man Booker Prize and other literary hosannas, has become one of the world’s great mystery men. You might know him better in that vein by his pen name — Benjamin Black…. Black is to mysteries what Guinness is to beer — rich, complex, satisfying… [Vengeance is] a delicious read."— WBUR (Boston’s NPR News Station)

"Sly, engaging… The stylish mystery of Vengeance unravels in an Ireland where the Catholic Church and its traditions hold a firm grip. Black introduces us to a fascinating, finely drawn group of suspects." —Shelf Awareness

"Tautly paced… [Black’s] new book is the best to date. Detective Inspector Hackett is back, his Irish country charm belying his keen mind, along with Quirke, a broody pathologist who always manages to fall off the wagon and bed a prime suspect."—Library Journal

"Black is in superbly crafty form…[He] keeps the plot sleek as his gleaming prose sails across the page as swiftly as the yachts owned by the wealthy victims in his latest tale of mannerly murder among the Irish elite… A seductively moody and shrewdly damning tale of privilege, arrogance, vengeance, and a touch of madness."—Booklist

"Black is in fine fettle, as usual; his prose harkens back to an earlier time, when the English language was to be savored. He develops a plot with the best of them, and his characters are finely drawn and challenging."—Bookpage

"Quirke remains a compelling mystery, perhaps to himself most of all… Along the way, there’s the pleasure of Black’s prose." —Kirkus Reviews