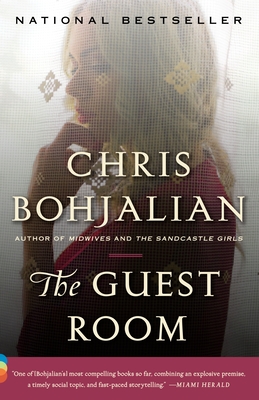 By Chris Bohjalian
$16.00
Email or call for price.

“From the explosive beginning all the way to the adrenaline rush of its conclusion, The Guest Room packs an emotional punch that will leave the reader gasping. When a bachelor party goes terribly wrong and two Russian mobsters wind up dead in his home, financier Richard Chapman finds himself struggling to save his job and marriage. Intertwined with Richard's story is the tale of Alexandra, a young sex slave with a narrative voice that will break your heart. Nobody does domestic drama quite like Bohjalian. Once again he proves himself a master of page-turning literary fiction.”
— Pamela Kinger-Horn (E), Excelsior Bay Books, Excelsior, MN

From the New York Times bestselling author of The Flight Attendant comes the spellbinding tale of a party gone horribly wrong: two men lie dead in a suburban living room, two women are on the run from police, and a marriage is ripping apart at the seams.

When Kristin Chapman agrees to let her husband, Richard, host his brother's bachelor party, she expects a certain amount of debauchery. She takes their young daughter to Manhattan for the evening, leaving her Westchester home to the men and their hired entertainment. What she does not expect is that the entertainment—two scared young women brought there by force—will kill their captors and drive off into the night.

With their house now a crime scene, Kristin's and Richard’s life spirals into nightmare. Kristin is unable to forgive her husband for his lapses in judgement, or for the moment he shared with a dark-haired girl in the guest room. But for the dark-haired girl, Alexandra, the danger is just beginning.

CHRIS BOHJALIAN is the author of twenty books, including The Guest Room; Close Your Eyes, Hold Hands; The Sandcastle Girls; Skeletons at the Feast; The Double Bind; and Midwives which was a number one New York Times bestseller and a selection of Oprah's Book Club. Chris's work has been translated into more than thirty languages, and three novels have become movies (Secrets of Eden, Midwives, and Past the Bleachers). Chris lives in Vermont and can be found at www.chrisbohjalian.com or on Facebook, Instagram, Twitter, Litsy, and Goodreads.

“One of Bohjalian’s most compelling books so far, combining an explosive premise, a timely social topic, and fast-paced storytelling with a purpose.” —The Miami Herald

“A gripping story about suburban American lives ripped apart. . . . Hard to put down, or ever forget.” —Minneapolis Star-Tribune

“A story both global and intimate. . . . Heartbreaking.” —The Boston Globe

“[Has] an edge-of-the-seat momentum that propels the reader straight to the last page.” —Anita Shreve, The Washington Post

“Heartbreaking. . . . I won’t give away of the surprising twists and turns that The Guest Room takes on the path to Bohjalian’s daring conclusion; I'll only note that much of the pleasure that comes from reading any well-constructed narrative lies in trying to anticipate how the author will write himself out of seemingly inescapable corners. But here, for a change, we also have a novelist who seems more concerned with examining and dramatizing a much more universal question: whether, in the end, any amount of love or compassion, retreat or nobility or forgiveness, can overcome the remorseless workings of evil." —The San Francisco Chronicle

“Bohjalian’s deftness as a story teller is on full display here, as he couples the urgency of a compulsively readable crime thriller with a quiet meditation on the meaning of family and relationships.” —Geraldine Brooks, Pulitzer Prize winning author of March

“Alexandra is the conscience in this conscienceless world, a girl who manages to hold on to her innocence and compassion despite the horror of her life. Her voice … is rendered with such perfection that it’s easy to forget that the author is male.” —BookPage

“Suspenseful. . . . It took all of our willpower to not bite off all of our nails as we tore through this dark thriller.” —Lynsey Eidell, Glamour

“The Guest Room pulses quick as a page-turner, but its concerns run deep into the moral consequences following an eruption of violence in ordinary lives.” —Charles Frazier, National Book Award winning author of Cold Mountain

“Reads like a thriller. . . . Chris does a terrific job of exploring the very dark side of trafficking and the women who are preyed on.”—Bookreporter

“From its very first page to an emotionally charged surprise ending, Bohjalian's fast-paced plot draws readers in and makes the book truly 'hard to put down.'. . . Remarkable. . . . A captivating and insightful read." —The Armenian Weekly

“Gripping. . . . Venturing into crime-thriller territory familiar to fans of Harlan Coben, Bohjalian’s page-turner about an average Joe caught up in sordid events beyond his control resonates with chilling plausibility.” —Booklist