Riders of the Pony Express (Hardcover) 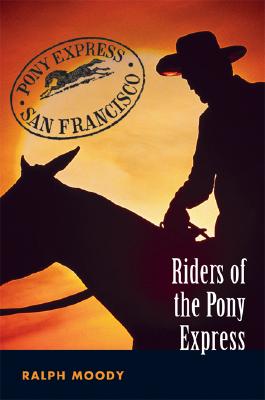 Prior to the Civil War, the fastest mail between the West Coast and the East took almost thirty days by stagecoach along a southern route through Texas. Some Californians feared their state would not remain in the Union, separated so far from the free states. Then businessman William Russell invested in a way to deliver mail between San Francisco and the farthest western railroad, in Saint Joseph, Missouri—across two thousand miles of mountains, deserts, and plains—guaranteed in ten days or less. Russell hired eighty of the best and bravest riders, bought four hundred of the fastest and hardiest horses, and built relay stations along a central route--through modern-day Kansas, Nebraska, Colorado, Wyoming, Utah, and Nevada, to California. Informed by his intimate knowledge of horses and Western geography, Ralph Moody's exciting account of the eighteen critical months that the Pony Express operated between April 1860 and October 1861 pays tribute to the true grit and determination of the riders and horses of the Pony Express.

Ralph Moody (1898–1982) is the author of Come on Seabicuit! as well as the Little Britches series about a boy's life on a Colorado ranch, all available in Bison Books editions.

"[A] vivid portrayal of the courageous, hard-riding men who braved hazardous terrain, foul weather, and hostile Indians to carry the mail via Pony Express."—Booklist

"No boy or girl (or adults either) will want to lay down this play-by-play account of each rider's 'stint.' . . . The many vivid drawings and the clear and detailed maps add much to the effective demonstration."—San Francisco News

"A true adventure story in which the period comes alive."—San Francisco Chronicle