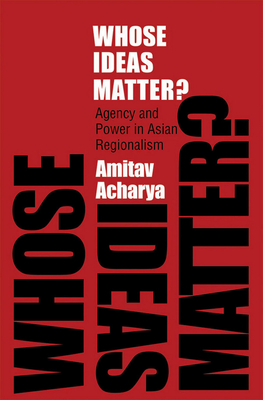 By Amitav Acharya
Email or call for price.

Asia is a crucial battleground for power and influence in the international system. It is also a theater of new experiments in regional cooperation that could redefine global order. Whose Ideas Matter? is the first book to explore the diffusion of ideas and norms in the international system from the perspective of local actors, with Asian regional institutions as its main focus.

There's no Asian equivalent of the EU or of NATO. Why has Asia, and in particular Southeast Asia, avoided such multilateral institutions? Most accounts focus on U.S. interests and perceptions or intraregional rivalries to explain the design and effectiveness of regional institutions in Asia such as SEATO, ASEAN, and the ASEAN Regional Forum. Amitav Acharya instead foregrounds the ideas of Asian policymakers, including their response to the global norms of sovereignty and nonintervention. Asian regional institutions are shaped by contestations and compromises involving emerging global norms and the preexisting beliefs and practices of local actors.

Acharya terms this perspective constitutive localization and argues that international politics is not all about Western ideas and norms forcing their way into non-Western societies while the latter remain passive recipients. Rather, ideas are conditioned and accepted by local agents who shape the diffusion of ideas and norms in the international system. Acharya sketches a normative trajectory of Asian regionalism that constitutes an important contribution to the global sovereignty regime and explains a remarkable continuity in the design and functions of Asian regional institutions.

Amitav Acharya is Professor of International Affairs at American University, Washington, D.C. He was Professor of Global Governance at the University of Bristol. He is the author of The Making of Southeast Asia, also from Cornell, and Constructing a Security Community in Southeast Asia and coeditor of Crafting Cooperation.