Conservatism: An Anthology of Social and Political Thought from David Hume to the Present (Paperback) 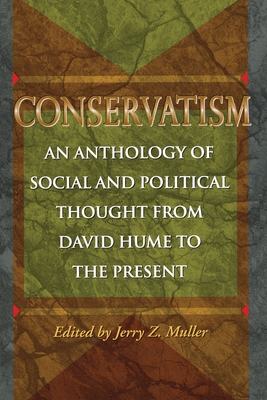 At a time when the label conservative is indiscriminately applied to fundamentalists, populists, libertarians, fascists, and the advocates of one or another orthodoxy, this volume offers a nuanced and historically informed presentation of what is distinctive about conservative social and political thought. It is an anthology with an argument, locating the origins of modern conservatism within the Enlightenment and distinguishing between conservatism and orthodoxy. Bringing together important specimens of European and American conservative social and political analysis from the mid-eighteenth century through our own day, Conservatism demonstrates that while the particular institutions that conservatives have sought to conserve have varied, there are characteristic features of conservative argument that recur over time and across national borders.

Jerry Z. Muller is Professor of History at the Catholic University of America in Washington, D.C. His previous books, Adam Smith in His Time and Ours: Designing the Decent Society and The Other God That Failed: Hans Freyer and the Deradicalization of German Conservatism are available from Princeton in paperback.