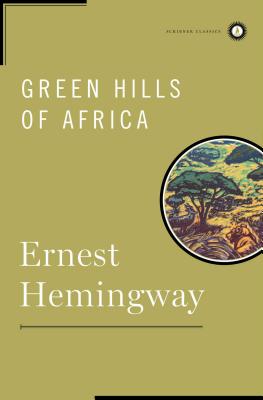 By Ernest Hemingway
$25.00
Email or call for price.

"There are some things which cannot be learned quickly, and time, which is all we have, must be paid heavily for their acquiring. They are the very simplest things, and because it takes a man's life to know them the little new that each man gets from life is very costly and the only heritage he has to leave."
-- ERNEST HEMINGWAY

In the winter of 1933, Ernest Hemingway and his wife Pauline set out on a two-month safari in the big-game country of East Africa, camping out on the great Serengeti Plain at the foot of magnificent Mount Kilimanjaro. "I had quite a trip," the author told his friend Philip Percival, with characteristic understatement.
Green Hills of Africa is Hemingway's account of that expedition, of what it taught him about Africa and himself. Richly evocative of the region's natural beauty, tremendously alive to its character, culture, and customs, and pregnant with a hard-won wisdom gained from the extraordinary situations it describes, it is widely held to be one of the twentieth century's classic travelogues.

Ernest Hemingway did more to influence the style of English prose than any other writer of his time. Publication of The Sun Also Rises and A Farewell to Arms immediately established him as one of the greatest literary lights of the 20th century. His classic novella The Old Man and the Sea won the Pulitzer Prize in 1953. Hemingway was awarded the Nobel Prize for Literature in 1954. He died in 1961.