Konin: One Man's Quest for a Vanished Jewish Community (Paperback) 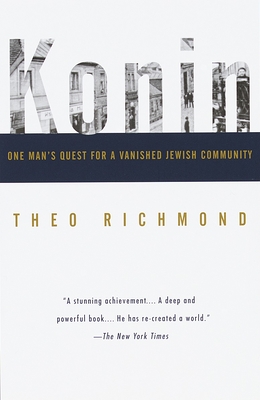 The internationally acclaimed story of a Jewish ghetto in a small town in Poland—and of one man's obsessive quest to discover its fate and its survivors after the Holocaust. • "A stunning achievement.... A deep and powerful book.... He has re-created a world." —The New York Times

In 1939 the Polish town of Konin vanished in the wake of Nazi occupation. Twenty-five years later, Theo Richmond set out to find what he could about that vanished world. He traveled across the United States, Europe, and Israel, tracing survivors and sifting through archives and the stories of those he interviewed. A project he thought would take six months took seven years. Finally he confronted the Konin of today. Interweaving past and present, Konin tells the story of one community—how it began, how it flourished, and how it ended—and in the process re-creates the precariousness, anguish and necessity of human memory.

THEO RICHMOND was born in London and graduated with a degree in International Relations from the London School of Economics. He wrote on historical subjects and the arts for leading newspapers and journals. As a documentary filmmaker, he scripted and directed award-winning television programs and educational films. He was married to the novelist Lee Langley. He died in 2022.

"A stunning achievement.... A deep and powerful book.... He has re-created a world." —The New York Times

"A fascinating memorial to a lost community and the people who lived there." —The New York Times Book Review

"One reads [it] sometimes with a smile...always on the edge of tears—as if it were the most gripping adventure story." —Elie Wiesel, New York Newsday