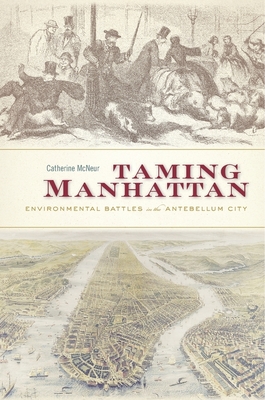 With pigs roaming the streets and cows foraging in the Battery, antebellum Manhattan would have been unrecognizable to inhabitants of today's sprawling metropolis. Fruits and vegetables came from small market gardens in the city, and manure piled high on streets and docks was gold to nearby farmers. But as Catherine McNeur reveals in this environmental history of Gotham, a battle to control the boundaries between city and country was already being waged, and the winners would take dramatic steps to outlaw New York's wild side. " A] fine book which make s] a real contribution to urban biography."
--Joseph Rykwert, Times Literary Supplement "Tells an odd story in lively prose...The city McNeur depicts in Taming Manhattan is the pestiferous obverse of the belle epoque city of Henry James and Edith Wharton that sits comfortably in many imaginations... Taming Manhattan] is a smart book that engages in the old- fashioned business of trying to harvest lessons for the present from the past."
--Alexander Nazaryan, New York Times