The Inheritance of Rome: Illuminating the Dark Ages, 400-1000 (Hardcover) 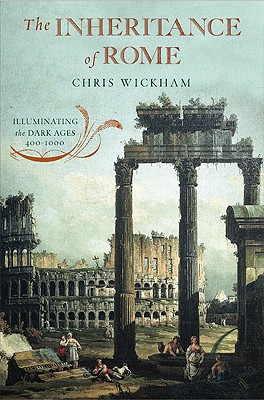 Prizewinning historian Chris Wickham defies the conventional view of the Dark Ages in European history with a work of remarkable scope and rigorous yet accessible scholarship. Drawing on a wealth of new material and featuring a thoughtful synthesis of historical and archaeological approaches, Wickham argues that these centuries were critical in the formulation of European identity. Far from being a middle period between more significant epochs, this age has much to tell us in its own right about the progress of culture and the development of political thought.

Sweeping in its breadth, Wickham's incisive history focuses on a world still profoundly shaped by Rome, which encompassed the remarkable Byzantine, Carolingian, and Ottonian empires, and peoples ranging from Goths, Franks, and Vandals to Arabs, Anglo- Saxons, and Vikings. Digging deep into each culture, Wickham constructs a vivid portrait of a vast and varied world stretching from Ireland to Constantinople, the Baltic to the Mediterranean. The Inheritance of Rome brilliantly presents a fresh understanding of the crucible in which Europe would ultimately be created.