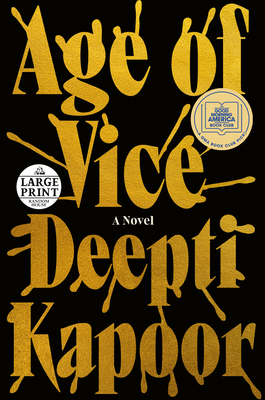 A crime thriller/family saga tagged India's "The Godfather," Age of Vice takes a hard look at the political and moral corruption in India's capitalist system, while adding toxic family dynamics and an ill-fated love story. The novel is told by three main characters: the playboy scion of a crime family, a female journalist/cultural elite, and a "lower-caste" servant. This is the first of a trilogy. Superb cinematic writing with an adaptation already underway.

“A potent and moving crime drama set in India, Age of Vice takes a magnifying glass to the corruption and violence caused by wealth. Sweeping in scope yet attuned to the minute details of everyday life, this is a novel that’s not to be missed.”
— Bennard Fajardo, Politics and Prose Bookstore, Washington, DC

“Dazzling...Finally free from the book’s grip, now all I want to do is get others hooked.”— The Washington Post

“Cinematic…A luxe thriller…As a storyteller, Kapoor is a natural.”-- The New York Times

"Sensationally good — huge, epic, immersive and absorbing ... certain to be a book of the year." —Lee Child

This is the age of vice, where money, pleasure, and power are everything,
and the family ties that bind can also kill.

New Delhi, 3 a.m. A speeding Mercedes jumps the curb and in the blink of an eye, five people are dead. It’s a rich man’s car, but when the dust settles there is no rich man at all, just a shell-shocked servant who cannot explain the strange series of events that led to this crime. Nor can he foresee the dark drama that is about to unfold.

Deftly shifting through time and perspective in contemporary India, Age of Vice is an epic, action-packed story propelled by the seductive wealth, startling corruption, and bloodthirsty violence of the Wadia family -- loved by some, loathed by others, feared by all.

In the shadow of lavish estates, extravagant parties, predatory business deals and calculated political influence, three lives become dangerously intertwined: Ajay is the watchful servant, born into poverty, who rises through the family’s ranks. Sunny is the playboy heir who dreams of outshining his father, whatever the cost. And Neda is the curious journalist caught between morality and desire. Against a sweeping plot fueled by loss, pleasure, greed, yearning, violence and revenge, will these characters’ connections become a path to escape, or a trigger of further destruction?

Equal parts crime thriller and family saga, transporting readers from the dusty villages of Uttar Pradesh to the urban energy of New Delhi, Age of Vice is an intoxicating novel of gangsters and lovers, false friendships, forbidden romance, and the consequences of corruption. It is binge-worthy entertainment at its literary best.

Deepti Kapoor grew up in northern India and worked for several years as a journalist in New Delhi. The author of the novel Bad Character, she now lives in Portugal with her husband.