One Step Too Far: A Novel (A Frankie Elkin Novel #2) (Hardcover) 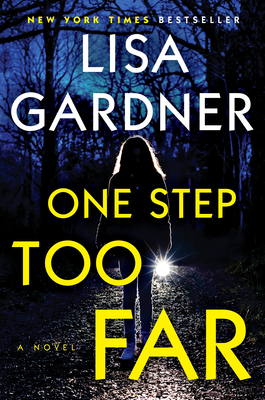 This is book number 2 in the A Frankie Elkin Novel series.

From #1 New York Times bestselling author Lisa Gardner, a chilling thriller about a young man gone missing in the wilderness of Wyoming . . . and the secrets uncovered by the desperate effort to find him

Timothy O’Day knew the woods. Yet when he disappeared on the first night of a bachelor party camping trip with his best friends in the world, he didn’t leave a trace. What he did leave behind were two heartbroken parents, a crew of guilt-ridden groomsmen, and a pile of clues that don’t add up.

Frankie Elkin doesn’t know the woods, but she knows how to find people. So when she reads that Timothy’s father is organizing one last search, she heads to Wyoming. Despite the rescue team’s reluctance, she joins them. But as they hike into the mountains, it becomes clear that there’s something dangerous at work in the woods . . . or someone who is willing to do anything to stop them from going any farther.

Running out of time and up against the worst man and nature have to offer, Frankie and the search party will discover what evil awaits those who go one step too far . . .

Lisa Gardner is the #1 New York Times bestselling author of twenty-one suspense novels, including The Neighbor, which won Thriller of the Year from the International Thriller Writers. An avid hiker, traveler, and cribbage player, she lives in the mountains of New Hampshire with her family.

Praise for One Step Too Far

“It’s not often that a thriller so deeply casts us into the darkness of both nature and the human heart. . . . Terrifying, primal, and very, very tense. Read it with your heart in your throat—but read it.”
—Kirkus Reviews (starred review)

“The appeal of Lisa Gardner’s second Frankie Elkin mystery lies mainly with the meticulously researched science and lore on surviving in the wilderness--and with the endearingly strange Frankie herself.”
—The Washington Post

"Gardner's gripping sequel to 2021's Before She Disappeared . . . winds toward a surprising conclusion."
—Publishers Weekly

"Master storyteller and avid hiker Lisa Gardner has written the book she was meant to write, an immersive, propulsive, utterly chilling, and yet deeply moving wilderness thriller in which her intimate knowledge of and love for the rugged Wyoming backcountry shines through on every terrifying page. Without a doubt, the best book I’ve read all year.”
—Karen Dionne, author of The Marsh King’s Daughter

"Visceral, unpredictable, and terrifying. You’ll never hike into the woods again without thinking of Lisa Gardner’s One Step Too Far."
—Robert Dugoni, #1 Amazon bestselling author of the Tracy Crosswhite series

"And Then There Were None meets Deliverance. Gardner’s latest will have you flipping pages at breakneck speed, guessing and gasping."
—Linwood Barclay, author of Find You First

“You’ll root for Frankie (and for a diligent cadaver dog named Daisy) on every page of this tense, crackling read.”
—People

“A hybrid combination of C. J. Box and Nevada Barr at their level best . . . this is thriller writing of the absolute highest order, as great a novel as it is a page-turner.”
—Providence Journal

“Gardner can be counted on to send a shiver down the spine, but this one exceeds even her high standards.”
—Daily Mail

“A tour de force in suspense and red herrings with a twist ending I did not even begin to anticipate.”
—Bookpage (starred review)

“Riveting. I enjoyed every bit of One Step Too Far.”
—The St. Louis Post-Dispatch

“As is her trademark, the thrills grow and the storyline gets more complex as the group goes farther into the wilderness. Gardner has another winning series to keep us up at night.”
—The Florida Times-Union

“Everything you could ask for in a great mystery: secrets, suspense, excellent pace, and great characters.”
—Mystery and Suspense

“One Step Too Far takes us on a harrowing journey into the dark wilderness of the human heart, where fear and desperation reveal exactly who we are.”
—New York Journal of Books

“One Step Too Far builds atmosphere and tension subtly and skillfully, drawing us further into the adventure even as we start wanting to pull back and get everyone home.”
—Fresh Fiction

“A page turner from the beginning . . . This book kept me on the edge of my seat the entire time I was reading it.”
—The Buzz Magazine

“I didn’t want it to end.”
—The Book Review Crew

“Phenomenal . . . If you are a living, breathing human, you should read this book.”
—Nerd Problems

“One Step Too Far is a fascinating, engrossing, thrilling, and chilling mystery that will keep you reading late into the wee hours.”
—All About Romance

“This dark, tense, terrifying book will have you on the edge of your seat.”
—Napa Valley Register