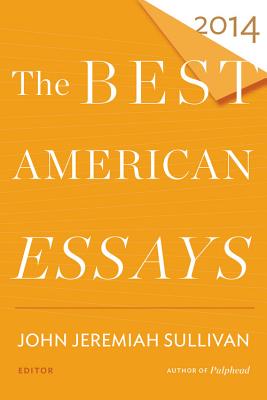 “A creature from an alternative universe . . . wanting to understand what is on the American mind should rush to the nearest bookstore and buy a copy of this distinguished anthology . . . Exhilarating.” — Publishers Weekly

The Best American Essays 2014 is selected and introduced by John Jeremiah Sullivan, author of  the critically acclaimed essay collection Pulphead. The New York Times placed Sullivan “among the best young nonfiction writers in English” and the New York Times Book Review heralded Pulphead as “the best, and most important, collection of magazine writing since Wallace’s A Supposedly Fun Thing I’ll Never Do Again.”

John Jeremiah Sullivan is a contributing writer for the New York Times Magazine and the southern editor of the Paris Review. He writes for GQ, Harper’s Magazine, and Oxford American and is the author of Blood Horses and Pulphead, a 2011 National Book Critics Circle Award nominee.

ROBERT ATWAN has been the series editor of The Best American Essays since its inception in 1986. He has edited numerous literary anthologies and written essays and reviews for periodicals nationwide.