Manual for Survival: An Environmental History of the Chernobyl Disaster (Paperback) 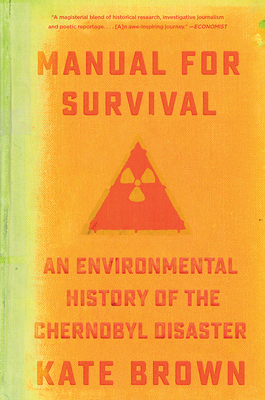 Finalist for the National Book Critics Circle Award in Nonfiction

Winner of the Reginald Zelnik Book Prize in History and the Marshall D. Shulman Book Prize

After the Chernobyl nuclear disaster in 1986, international aid organizations sought to help the victims but were stymied by post-Soviet political roadblocks. Efforts to gain access to the site of catastrophic radiation damage were denied, and the residents of Chernobyl were given no answers as their lives hung in the balance. Drawing on a decade of archival research and on-the-ground interviews in Ukraine, Russia, and Belarus, Kate Brown unveils the full breadth of the devastation and the whitewash that followed. Her findings make clear the irreversible impact of man-made radioactivity on every living thing; and hauntingly, they force us to confront the untold legacy of decades of weapons-testing and other catastrophic nuclear incidents.

Kate Brown is an award-winning historian of environmental and nuclear history at the Massachusetts Institute of Technology. Her previous book, Plutopia, won seven academic prizes. She splits her time between Washington, D.C., and Cambridge, Massachusetts.

A handbook for a 'postnuclear reality.'
— Sonja Schmid - Nature

Manual for Survival is a must-read for anyone who wants to understand the local and global effects of Chernobyl, and its continuing impacts.

Kate Brown presents a convincing challenge to the official narrative of the Chernobyl disaster. Deeply reported and elegantly written, Manual for Survival is chilling.

With bountiful, devastating detail, Brown describes how scientists, doctors, and journalists—mainly in Ukraine and Belarus—went to great lengths and took substantial risks to collect information.… One of the most alarming—though also eerily beautiful—aspects of Brown’s book is her description of the way radioactive material moves through organisms, ecosystems, and human society.… Manual for Survival asks a larger question about how humans will coexist with the ever-increasing quantities of toxins and pollutants that we introduce into our air, water, and soil. Brown’s careful mapping of the path isotopes take is highly relevant.

This engagingly written book reads like a cold war thriller and uncovers the devastating effects of one of the world’s worst nuclear disasters.
— Allison Macfarlane, director, Institute for International Science and Technology Policy, George Washington University

Gripping.… Kate Brown’s relentless, tenacious reporting shows that Chernobyl isn’t the past at all. Nothing, she makes clear, can stop its radiation from seeping through all attempts to bury the truth for a long time to come. This deftly written, impassioned, courageous book should make the world think twice about what’s at stake when we unleash nuclear reactions.
— Alan Weisman, author, The World Without Us and Countdown: Our Last, Best Hope for a Future on Earth?

Brown knows her landscape exceptionally well, down to the last tiny village that suffered from the disaster.
— Serhii Plokhi - Evening Standard