Blood and Thunder: An Epic of the American West (Hardcover) 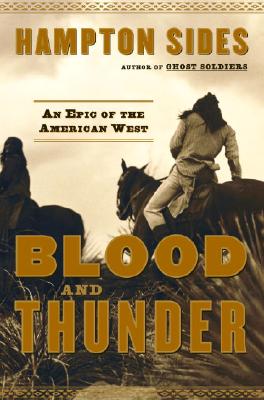 Praise for Blood and Thunder


“Kit Carson’s role in the conquest of the Navajo during and after the Civil War remains one of the most dramatic and significant episodes in the history of the American West. Hampton Sides portrays Carson in the larger context of the conquest of the entire West, including his frequent and often lethal encounters with hostile Native Americans. Unusually, Sides gives full voice to Indian leaders themselves about their trials and tribulations in their dealings with the whites. Here is a national hero on the level of Daniel Boone, presented with all of his flaws and virtues, in the context of American people’s belief that it was their Manifest Destiny to occupy the entire West.”

—Howard Lamar, Sterling Professor Emeritus of History, Yale University and editor of The New Encyclopedia of the American West


“The story of the American West has seldom been told with such intimacy and immediacy. Legendary figures like Kit Carson leap to life and history moves at a pulse-pounding pace—sweeping the reader along with it. Hampton Sides is a terrific storyteller.”

—Candice Millard, author of The River of Doubt


“Hampton Sides doesn't just write a book, he transports the reader to another time and place. With his keen sense of drama and his crackling writing style, this master storyteller has bequeathed us a majestic history of the Old West.”

—James Bradley, author of Flags of Our Fathers and Flyboys


“Blood and Thunder is a big-hearted book whose subject is as expansive as they come. Hampton Sides tackles it with naked pleasure and narrative cunning: In his telling, the vast saga of America’s westward push has a logical center. The dusty town of Santa Fe becomes the nexus around which swirl the fortunes and strategies of a mixed set of serious overachievers, from Kit Carson, the original mountain man, to James K. Polk, the enigmatic president whose achievements, in the dreaded name of Manifest Destiny, were almost biblical in scope. Sides is alive to the exuberance and alert to the tragedy of the taking of the West.”

—Russell Shorto, author of Island at the Center of the World


“For a huge percentage of us immigrant Americans (those whose ancestors arrived after 1492), Hampton Sides fills a gaping hole in our knowledge of American history—a vivid account of how ‘The New Men’ swept away the thriving civilizations of the Native Americans in their conquest of the West.”

"BLOOD AND THUNDER is a balanced, thoughtful summary of the American conquistadors in the 19th century Southwest. Hampton Sides has re-created violent events and such inflammatory figures as Kit Carson without bias. Carefully researched, thoroughly enjoyable."

-Evan S. Connell, author of SON OF THE MORNING STAR, CUSTER AND THE LITTLE BIGHORN

In the fall of 1846 the venerable Navajo warrior Narbona, greatest of his people’s chieftains, looked down upon the small town of Santa Fe, the stronghold of the Mexican settlers he had been fighting his whole long life. He had come to see if the rumors were true—if an army of blue-suited soldiers had swept in from the East and utterly defeated his ancestral enemies. As Narbona gazed down on the battlements and cannons of a mighty fort the invaders had built, he realized his foes had been vanquished—but what did the arrival of these “New Men” portend for the Navajo?

Narbona could not have known that “The Army of the West,” in the midst of the longest march in American military history, was merely the vanguard of an inexorable tide fueled by a self-righteous ideology now known as “Manifest Destiny.” For twenty years the Navajo, elusive lords of a huge swath of mountainous desert and pasturelands, would ferociously resist the flood of soldiers and settlers who wished to change their ancient way of life or destroy them.

Hampton Sides’s extraordinary book brings the history of the American conquest of the West to ringing life. It is a tale with many heroes and villains, but as is found in the best history, the same person might be both. At the center of it all stands the remarkable figure of Kit Carson—the legendary trapper, scout, and soldier who embodies all the contradictions and ambiguities of the American experience in the West. Brave and clever, beloved by his contemporaries, Carson was an illiterate mountain man who twice married Indian women and understood and respected the tribes better than any other American alive. Yet he was also a cold-blooded killer who willingly followed orders tantamount to massacre. Carson’s almost unimaginable exploits made him a household name when they were written up in pulp novels known as “blood-and-thunders,” but now that name is a bitter curse for contemporary Navajo, who cannot forget his role in the travails of their ancestors.

A native of Memphis, HAMPTON SIDES is editor-at-large for" Outside" magazine and the author of the international bestseller" Ghost Soldiers," which was the basis for the 2005 Miramax film" The Great Raid. Ghost Soldiers" won the 2002 PEN USA Award for nonfiction and the 2002 Discover Award from Barnes & Noble, and his magazine work has been twice nominated for National Magazine Awards for feature writing. Hampton is also the author of" Americana "and" Stomping Grounds." A graduate of Yale with a B.A. in history, he lives in New Mexico with his wife, Anne, and their three sons.

“Riveting . . . monumental . .. . Not only does Blood and Thunder capture a pivotal moment in U.S. history in marvelous detail, it is also authoritative and masterfully told.”
—The Washington Post Book World

“Stunning. . . Both haunting and lyrical, Blood and Thunder is truly a masterpiece.”
—Los Angeles Times

“We see a panorama and a whole history, intricately laced with wonder and meaning, coalesce into a story of epic proportions, a story full of authority and color, truth and prophecy . . . Sides fills a conspicuous void in the history of the American West.”
—N. Scott Momaday, The New York Times Book Review

“From the lean crisp descriptions of the characters to the sights, sounds and smells of the trail, this is a crystal clear picture of the West.” —San Antonio Express News