The Southern Gates of Arabia: A Journey in the Hadhramaut (Paperback) 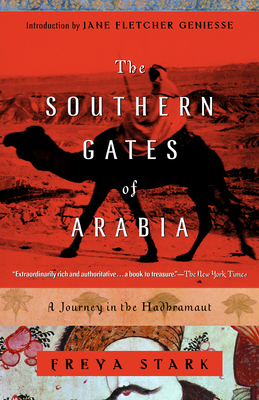 In 1934, famed British traveler Freya Stark sailed down the Red Sea, alighting in Aden, located at the tip of the Arabian peninsula. From this backwater outpost, Stark set forth on what was to be her most unforgettable adventure: Following the ancient frankincense routes of the Hadhramaut Valley, the most fertile in Arabia, she sought to be the first Westerner to locate and document the lost city of Shabwa. Chronicling her journey through the towns and encampments of the Hadhramaut, The Southern Gates of Arabia is a tale alive with sheikhs and sultans, tragedy and triumph. Although the claim to discovering Shabwa would not ultimately be Stark's, The Southern Gates of Arabia, a bestseller upon its original publication, remains a classic in the literature of travel. This edition includes a new Introduction by Jane Fletcher Geniesse, Stark's biographer.

Freya Stark, described by The Times of London as "the last of the Romantic Travellers" upon her death in 1993, published during her lifetime more than thirty books about her travels in the Middle East, including The Southern Gates of Arabia.

Jane Fletcher Geniesse is a former reporter for The New York Times and the author of the biography Passionate Nomad: The Life of Freya Stark, a finalist for the 1999 PEN/Martha Albrand Award for First Nonfiction. Her writing has been featured in The Washington Post, New York magazine, and Town & Country. She lives in Washington, D.C.

[Freya Stark] writes angelically in the great tradition of Charles Doughty and T. E. Lawrence. The pulse quickens as you read, because she can bring the sights and sounds of incredible countries before you in the twinkling of an eye."
--The New York Times Book Review

"[The Valleys of the Assassins] remains a wonderful description of a people and a place, altered today by Progress, perhaps, but through [Freya Stark's] eyes still alive with bandits, dervishes, idol worshippers, armed tribesmen, and mountain scenery of great beauty."
--From the Introduction by Jane Fletcher Geniesse

"Stark is constantly alive to her immediate surroundings: indeed, what gives her work its extraordinary depth and power is just this ability to focus past and present... stereoscopically, in a single image."
--Times Literary Supplement [London]