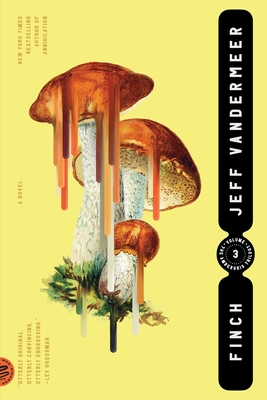 This is book number 3 in the The Ambergris Trilogy series.

“In this fantastic new sci-fi novel, Jeff Vandermeer does a great job creating and describing his grim and grittyly bizarre world and his downtrodden, not so utterly hopeless characters.”
— Julia Green, Front Street Books, Alpine, TX

From Jeff VanderMeer, the author of Borne and Annihilation, comes the paperback reissue of his cult classic Finch.

In a deserted tenement in an occupied city, two dead bodies lie on a dusty floor as if they have fallen out of the air. One corpse is cut in half, the other is utterly unmarked. One is human, the other isn’t. The city of Ambergris is half ruined, rotten, its population controlled by narcotics, internment camps, and acts of terror. But its new masters want this case closed, urgently. Detective John Finch has just one week to solve it or be sent to the camps. With no ID for the victims, no clues, no leads, and precious little hope, Finch’s fate hangs in the balance.

But there is more to this case than meets the eye. Enough to put Finch in the crosshairs of every spy, rebel, informer, and traitor in town. Under the shadow of the eldrich tower the occupiers are raising above the city, Finch is about to come face-to-face with a series of mysteries that will change him and Ambergris forever. Why does one of the victims most resemble a man thought to have been dead for a hundred years? What is the murders’ connection to an attempted genocide nearly six hundred years ago? And just what is the secret purpose of the occupiers’ tower?

Jeff VanderMeer is the author of Dead Astronauts, Borne, and The Southern Reach Trilogy, the first volume of which, Annihilation, won the Nebula Award and the Shirley Jackson Award and was adapted into a movie by Alex Garland starring Natalie Portman. VanderMeer speaks and writes frequently about issues relating to climate change. He grew up in the Fiji Islands and now lives in Tallahassee, Florida, with his wife, Ann VanderMeer, and their cats, plants, and bird feeders.