City of Saints and Madmen: A Novel (The Ambergris Trilogy #1) (Paperback) 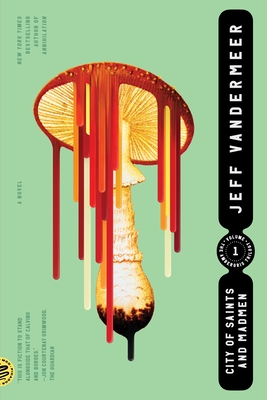 This is book number 1 in the The Ambergris Trilogy series.

From Jeff VanderMeer, the author of Borne and Annihilation, comes the paperback reissue of his cult classic City of Saints and Madmen. In this reinvention of the literature of the fantastic, you hold in your hands an invitation to a place unlike any you’ve ever visited—an invitation delivered by one of our most audacious and astonishing literary magicians.

City of elegance and squalor. Of religious fervor and wanton lusts. And everywhere, on the walls of courtyards and churches, an incandescent fungus of mysterious and ominous origin. In Ambergris, a would-be suitor discovers that a sunlit street can become a killing ground in the blink of an eye. An artist receives an invitation to a beheading—and finds himself enchanted. And a patient in a mental institution is convinced that he’s made up a city called Ambergris, imagined its every last detail, and that he’s really from a place called Chicago . . .

By turns sensuous and terrifying, filled with exotica and eroticism, this interwoven collection of stories, histories, and “eyewitness” reports invokes a universe within a puzzle box where you can lose—and find—yourself again.

Jeff VanderMeer is the author of Hummingbird Salamander, the Borne novels (Borne, The Strange Bird, and Dead Astronauts), and The Southern Reach Trilogy (Annihilation, Authority, and Acceptance), the first volume of which won the Nebula Award and the Shirley Jackson Award and was adapted into a movie by Alex Garland. He speaks and writes frequently about issues relating to climate change as well as urban rewilding. He lives in Tallahassee, Florida, on the edge of a ravine, with his wife, Ann VanderMeer, and their cat, Neo.