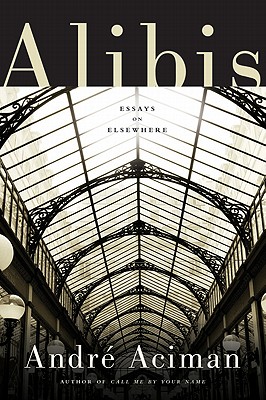 A Boston Globe Best Nonfiction Book of 2011 Celebrated as one of the most poignant stylists of his generation, André Aciman has written a luminous series of linked essays about time, place, identity, and art that show him at his very finest. From beautiful and moving pieces about the memory evoked by the scent of lavender; to meditations on cities like Barcelona, Rome, Paris, and New York; to his sheer ability to unearth life secrets from an ordinary street corner, Alibis reminds the reader that Aciman is a master of the personal essay.

Andre Aciman is the author of "Eight White Nights," " ""Call Me by Your Name," "Out of Egypt," and "False Papers, "and is the editor of "The Proust Project "(all published by FSG). He teaches comparative literature at the Graduate Center of the City University of New York. He lives with his wife and family in Manhattan.

Praise for Call Me by Your Name: "Aciman ... has an ability to make the finest, the tiniest and most convincing distinctions between moods, responses, and registers. Everything is watched as it shifts and glitters and then hesitates and maybe is shadowed over ... This really is fiction at its most supremely interesting; every clause and subclause shimmers with a densely observed and carefully rendered invention that seems oddly and delightfully precise and convincing ... There are many layers and levels in this story." —Colm Tóibín, The New York Review of Books Praise for Alibis:

“From the acclaimed Egyptian-born author, gorgeous musings on longing and memory fueled by travel.

A virtuoso in literary criticism, memoir and fiction (Eight White Nights, 2010, etc.), Aciman revisits themes that have obsessed him since his youth growing up in Alexandria, when he and his family were waiting for years for visas to migrate to Europe, then the United States. Anticipation—and all the longing it held—proved the ideal, romantic, satisfying state, rather than the actual delivery. For example, longing for America all those years proved much more delicious and lasting than the actual naked reality of living there. In each essay, Aciman elegantly palpates these themes of place and displacement (‘dispersion, evasion, ambivalence’). In ‘Lavender,’ the myriad scents of aftershave he will discover over the years mark milestones in his life, but hark back essentially to the first, significant scent of his father’s lavender aftershave. Initiating his young sons into the memories of his youth, in ‘Intimacy,’ involves taking them back to Via Clelia in Rome, where the author 40 years before lived in limbo with his family for three years while waiting for their visas to America. For Aciman, who was poor, speaking Italian self-consciously with a foreign accent, it was a time of shame, yet writing about it helps unlock the ‘numbness’ and encourages ‘dream-making.’ In ‘Temporizing,’ through the personal exploration of his family’s Marrano roots, the author fashions a brilliantly subtle excursus on the craft of a writer such as Proust, who avoids the tyranny of the particular, the day-to-day, by circumventing pain and sorrow at all costs, and passing all experience through ‘the literary time filter.’ Aciman’s own travel essays—on Venice, the Place des Vosges, Tuscany, Barcelona and New York—filter the present through an ever-shifting palette of sensuous memory and impression.

“‘Shame, which is the reluctance to be who we’re not even sure we are, could end up being the deepest thing about us, deeper even than who we are, as though beyond identity were buried reefs and sunken cities teeming with creatures we couldn’t begin to name because they came long before us.’”

You might think for a moment that these words belong to Freud or Kafka, but neither could have addressed the subject with quite the same elegance and lyricism—poetry, really—as the Egyptian Jewish émigré writer André Aciman. The quote comes from an essay about the author’s summer vacation in Rome that is included in his latest collection, Alibis: Essays on Elsewhere. This is what most of his travels, detailed in this book, have been like. Aciman is neither a thrill-seeking tourist nor a sophisticated Baudelarian flâneur, but rather a man in search of intense and unexpected moments of introspection, which are triggered by the various settings and cultures he encounters . . .

In Aciman’s writing, behind a facade of discussions, reminiscence, and contemplation there appear sudden slippages, admissions into the world of ‘ancient riffs and sunken cities’ that are fraught with truths that cannot be experienced other than through hints and insinuations.

In that way, Alibis is a much more personal and revealing book than Aciman’s memoir or his first essay collection. Now that the author has dissected his writing methodology and thought process so meticulously, the next book and new direction he’ll go toward seems more of a mystery still . . . That’s part of the excitement of reading Aciman, whose work is never a mere jest or entertaining distraction but genuine self-inquiry.” —Jake Marmer, Tablet

“In Aciman’s hands [memory] seems fresh and complex once again . . . On the occasion of Alibis, his project is ostensibly the result of his travels, and he does indeed treat readers to length reflections on Rome, Barcelona, Paris, Tuscany, and New York, among other locales. But these are not simple city guides. They are personal, searching efforts, prompted by places which hold some mythic quality for the author, places which have figured prominently in his life . . . Place itself is a door to other concerns for Aciman—the role of memory in particular, as well as how we form our identities across years and experiences. If his concerns sound weighty, he balances them against a fluid, engaging style, one equally suited to handling painful memories and dear ones alike . . . Aciman’s work is consistently thoughtful and unsentimental . . . André Aciman is a writer in full command of his powers . . . Alibis is a quiet, unassuming triumph.” —John Mcintyre, The Millions

“Now and then . . . we are offered a reading experience that reminds us of the gold standard in literature, and one such book is Alibis: Essays on Elsewhere by André Aciman . . . he shares with Proust an ability to plumb the depths of memory and meaning in the observed details of ordinary life . . . Aciman resolves the contradictions that he embodies—‘This feeling of being cut off from oneself or of being in two places at the same time’—with a simple credo: ‘Art is nothing more than an exalted way of stylizing distortions that have become unbearable.’ The statement surely applies to his own book, a work of alchemy that turns lead into gold.” —Jonathan Kirsch, The Jewish Journal

“Many of these essays begin with a city—New York, Barcelona, Rome—before spiraling into images and ideas that connect with other places and times in Aciman’s own well-traveled history. Born in Egypt, raised in a French-speaking Jewish family, his complex identity (is he African? French? Jewish?) confronts him with a ‘fundamental distortion’ that he can make sense of only by the transformative power of art . . . In a brilliant piece called ‘Temporizing,’ Aciman examines his own propensity for filtering all experiences through the Egypt in his mind. Writing, even thinking, thus becomes ‘an interminable restoration project whose purpose is to prevent all contact with the present.’ With his sly self-deprecation and supple, curious mind, Aciman is the perfect guide through the mysteries of time and place.” —Kate Tuttle, Boston Globe

“Maddening though this habit of searching for displaced selves might be in a traveling companion—the word ‘alibi’ literally means ‘elsewhere’—it is a pleasure in an essayist. While the roll call of places visited by Mr. Aciman is unexceptional, his angle on them is anything but, since his weakness for traveling ‘in search of lost time’ opens up telescoping possibilities of reverie and speculation. The allusion to Proust . . . sets the tone. Sometimes the lost time prospected is his own history, sometimes the history of a place, but the journey is always beguiling and its conclusion often poignant.” —Elizabeth Lowry, The Wall Street Journal

“André Aciman is, quite simply, one of the finest essayists of the last hundred years—you’d have to go back much farther, perhaps a visit to Montaigne, to find the combination of elegance, restraint, and longing that Aciman so generously bestows upon his reader . . .  You emerge with a perspective on life. You are reminded of the hard-won beauty of it all. You want to travel, to see things—they are a cure for agoraphobia . . . In these 16 essays, he explores everything: sight, smell, imagination, reality, numbness, decay, intimacy. He recalls favorite streets and streets he embellished in his memory, cities (Barcelona, Rome, New York), stories he told and stories he was told and where they met in the middle. He thinks about writing and how it alters experience . . . Aciman’s theorem: What you find when you go looking is almost always better than what you hoped for. Try it out. Assume it to be the case.” —Susan Salter Reynolds, The Los Angeles Review of Books