Dewey Defeats Truman: The 1948 Election and the Battle for America's Soul (Paperback) 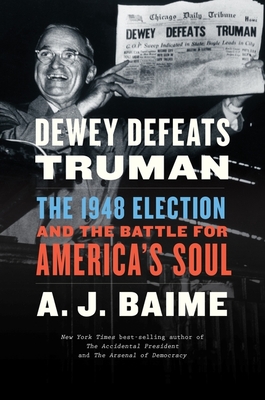 From the New York Times best-selling author of The Accidental President comes the thrilling story of the 1948 presidential election, one of the greatest election stories of all time, as Truman mounted a history-making comeback and staked a claim for a new course for America.

On the eve of the 1948 election, America was a fractured country. Racism was rampant, foreign relations were fraught, and political parties were more divided than ever. Americans were certain that President Harry S. Truman’s political career was over. “The ballots haven’t been counted,” noted political columnist Fred Othman, “but there seems to be no further need for holding up an affectionate farewell to Harry Truman.” Truman’s own staff did not believe he could win. Nor did his wife, Bess. The only man in the world confident that Truman would win was Mr. Truman himself. And win he did.

The year 1948 was a fight for the soul of a nation. In Dewey Defeats Truman, A. J. Baime sheds light on one of the most action-packed six months in American history, as Truman both triumphs and oversees watershed events—the passing of the Marshall plan, the acknowledgement of Israel as a new state, the careful attention to the origins of the Cold War, and the first desegregation of the military.

Not only did Truman win the election, he succeeded in guiding his country forward at a critical time with high stakes and haunting parallels to the modern day.

A. J. BAIME is the New York Times bestselling author of The Arsenal ofDemocracy: FDR, Detroit, and an EpicQuest to Arm an America at War, GoLike Hell: Ford, Ferrari, and Their Battlefor Speed and Glory at Le Mans, TheAccidental President: Harry S. Trumanand the Four Months That Changed the World, and Dewey Defeats Truman: The1948 Election and the Battle for America's Soul. Baime is a longtime regular contributor to the Wall Street Journal and his articles have also appeared in TheNew York Times, Popular Science, and Men’s Journal. He holds an MA in literature from NYU and currently lives in northern California.

“Few elections have been more dramatic and decisive than Truman vs. Dewey in 1948. And few have found a more able historian than A. J. Baime, who recounts this crucial moment with compelling verve and subtle insight.”
—H. W. Brands, New York Times best-selling author of Dreams of El Dorado and Heirs of the Founders

“A. J. Baime has written an illuminating book about one of our most mystifying presidential elections. He’s written an enchanting book, with his trademark riveting storytelling. And he’s written a hopeful book at a moment when that’s needed, showing that facts can matter and the good guy sometimes wins.”
—Larry Tye, New York Times best-selling author of Bobby

“The 20th century’s most exciting presidential campaign finally gets its due, and with it, A. J. Baime ascends to the pinnacle of Truman biographers. One knows how the story will end from the moment reading begins, yet Baime’s ability to paint an historical canvas shows in new and vivid details why this greatest election surprise in our nation’s history still captivates, resonating today with new insights into our own political divisions. This is the way history should be written.”
—Jeffrey Engel, author of When the World Seemed New

“Intimate, propulsive and eye-opening. A. J. Baime’s account of Harry Truman’s battle for the White House sweeps you up in its impeccably researched drama. A thrilling read.”
—Stephan Talty, author of The Black Hand and The Good Assassin

“An absorbing chronicle of the months leading up to the extraordinary 1948 presidential election . . . Insightful . . . Even readers familiar with Truman’s presidency will be engaged by the story of the campaign that came before.”
—Kirkus Reviews

"In this presidential election year, historian and journalist A.J. Baime has given America a winner."
—St. Louis Post-Dispatch

“The 1948 presidential campaign is like a great opera. The themes, characters and scenes are so compelling that they resonate again and again . . . Remarkably, many of the issues stoking this year’s febrile presidential campaign were already in play seven decades ago when radio and newspapers ruled the media and candidates courted voters from the rear platforms of railcars. There was even talk that the Russians were trying to interfere in the election . . . [Baime] brings the epic [campaign] back on stage with 'Dewey Defeats Truman: The 1948 Election and the Battle for America’s Soul,' a straightforward narrative studded with evocative detail and surprising factoids.”
—Wall Street Journal

"Well-paced . . . Baime skillfully leads readers to conclude what he surely had in mind from the outset: In an election, substance matters, as does courage and decency, and Truman displayed them all in 1948."
—Boston Globe

“Dewey Defeats Truman, A. J. Baime’s lively and insightful account of the second-most shocking presidential upset in modern history, delivers the best-reasoned and most revealing examination to date of that memorable mid-century election.”
—New York Journal of Books

"I thought the stakes had never been higher for Americans than this November – until I read A.J. Baime’s astonishing ‘Dewey Defeats Truman.’ . . . The parallels between 1948 and 2020 are staggering . . . This is a classic underdog story that works brilliantly regardless of any nods to the present day. And even though its end is known, Baime still manages to create superb tension as Truman takes his message to the American public . . . Someone buy those screen rights."
—Haaretz