Rise: A Pop History of Asian America from the Nineties to Now (Hardcover) 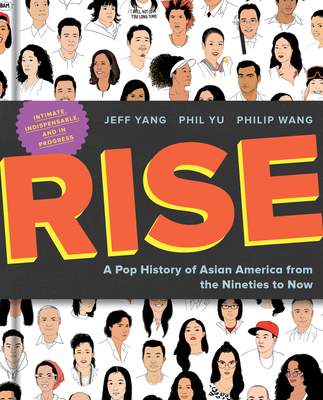 RISE is a love letter to and for Asian Americans--a vivid scrapbook of voices, emotions, and memories from an era in which our culture was forged and transformed, and a way to preserve both the headlines and the intimate conversations that have shaped our community into who we are today.

When the Hart-Celler Act passed in 1965, opening up US immigration to non-Europeans, it ushered in a whole new era. But even to the first generation of Asian Americans born in the US after that milestone, it would have been impossible to imagine that sushi and boba would one day be beloved by all, that a Korean boy band named BTS would be the biggest musical act in the world, that one of the most acclaimed and popular movies of 2018 would be Crazy Rich Asians, or that we would have an Asian American Vice President. And that’s not even mentioning the creators, performers, entrepreneurs, execs and influencers who've been making all this happen, behind the scenes and on the screen; or the activists and representatives continuing to fight for equity, building coalitions and defiantly holding space for our voices and concerns. And still: Asian America is just getting started.

The timing could not be better for this intimate, eye-opening, and frequently hilarious guided tour through the pop-cultural touchstones and sociopolitical shifts of the 1990s, 2000s, 2010s, and beyond. Jeff Yang, Phil Yu, and Philip Wang chronicle how we’ve arrived at today’s unprecedented diversity of Asian American cultural representation through engaging, interactive infographics (including a step-by-step guide to a night out in K-Town, an atlas that unearths historic Asian American landmarks, a handy “Appreciation or Appropriation?” flowchart, and visual celebrations of both our "founding fathers and mothers" and the nostalgia-inducing personalities of each decade), plus illustrations and graphic essays from major AAPI artists, exclusive roundtables with Asian American cultural icons, and more, anchored by extended insider narratives of each decade by the three co-authors. Rise is an informative, lively, and inclusive celebration of both shared experiences and singular moments, and all the different ways in which we have chosen to come together.

JEFF YANG has been observing, exploring, and writing about the Asian American community for over thirty years. He launched one of the first Asian American national magazines, A. Magazine, in the late '90s and early 2000s, and now writes frequently forCNN, Quartz, Slateand elsewhere.  He has written/edited three books—Jackie Chan’s New York Times-best-selling memoir I Am Jackie Chan: My Life in Action; Once Upon a Time in China, a history of the cinemas of Hong Kong, Taiwan and the Mainland; and Eastern Standard Time: A Guide to Asian Influence on American Culture. He lives in Los Angeles, CA.

PHIL YU is the founder and editor of the popular Asian American news and culture blog, Angry Asian Man, which has had a devoted following since 2001. His commentary has been featured and quoted in the The Washington Post, The New York Times, The Wall Street Journal, NPR, and elsewhere. He lives in Los Angeles, CA.

PHILIP WANG is the co-founder of the hugely influential production company Wong Fu Productions. Since the mid 2000s, his creative work has garnered over 3 million subscribers and half a billion views online, as well as recognition from NPR and CNN for its impact on Asian American representation. He lives in Los Angeles, CA.

“An eclectic work that colorfully observes seemingly everything…the book is a tome dedicated to what Asian America has looked, felt and sounded like in the past 30 years…The book, then, is not only a celebration but also a way to set the record straight.” — San Francisco Chronicle

“'RISE' is a homage to the seminal moments in sports, politics and entertainment that came to define contemporary Asian American culture…A buffet of offerings awaits the reader" — NBC News

"More than a cool primer or a pop history, this essential compendium documents Asian American culture from the 90s through today. Let the record stand, it’s an honor to be us."  — Min Jin Lee, author of Free Food for Millionaires and Pachinko, a finalist for the National Book Award

“What a Herculean effort by Phil, Phil and Jeff to put together such a terrifically entertaining and massively comprehensive read. Not only was it illuminating to learn about how Asian Americans have contributed to pop culture over the last thirty years, it made me feel so proud at a moment when so many of us have been questioning our belonging in America.”   — Lisa Ling, host of CNN's This is Life with Lisa Ling

“Rise is a book like no other. It is informative, entertaining, thoughtful, beautiful, and full of love. It has literally expanded my idea of American culture and American history. I cannot imagine that anybody could pick up this book and not be immediately engrossed and ultimately benefited. This book is a must-read for anybody and everybody.”  — Ijeoma Oluo, author of So You Want to Talk About Race and Mediocre

"Rise is a smart, funny, entertaining book. It makes you feel smarter for having read it without ever making you feel dumb for not already knowing the information inside. Get two copies because the first copy is definitely gonna get swiped off your coffee table by one of your friends."  — Shea Serrano, author of Hip-Hop (And Other Things) and Movies (And Other Things)

"Playful, wide-ranging, and informative, Rise is a book we've needed for ages. If you think you already know, it'll teach you tons you didn't. If you don't know anything, get reading: it's a perfect introduction to the wildly diverse and ever-evolving Asian American community."   — Celeste Ng, author of Everything I Never Told You and Little Fires Everywhere

"Rise is an accessible, informative, and fun compendium on Asian American pop culture and politics from Harold and Kumar to Asian dance crews to Black/Asian relations today. This book made me nostalgic for the 90's while reminding of ugly moments in American history like the racial profiling of scientist Wen Ho Lee. Jeff Yang, Phil Yu and Philip Wang offer us a vivid and readable tour of Asian American representation.”  — Cathy Park Hong, author of Minor Feelings

“Finally the book on Asian American pop culture that needed to be made. Don't be fooled by the fun, accessible presentation format because this book has serious substance on the criminally undertold but hugely essential contributions Asians have made to American culture. Also, I'm in it.”   — Ronny Chieng, senior correspondent on The Daily Show

"Illustrations, graphs, and text make this tour of history and Asian American excellence a book I didn’t know I needed but was glad to discover, and a welcome counterpoint to “explainer” nonfiction...All charmingly and engagingly illustrated." — Marie Myung-Ok Lee, O Magazine, "10 Must Read Books for AAPI Month"

"A hip, entertaining book, as imaginative in its presentation and stories as the generation it portrays."  — Kirkus Reviews (starred review)