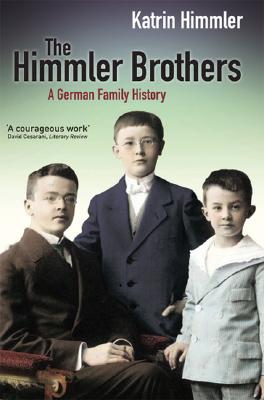 By Katrin Himmler
Email or call for price.
Out of Print

Once upon a time the Himmlers were just a normal German family—middle-class, hard-working, well-educated. There were three brothers, Gebhart, Heinrich, and Ernst. Heinrich grew up to become the head of Hitler’s SS, mastermind of the concentration camp system, and chief perpetrator of the Holocaust. When Katrin Himmler, Heinrich’s great-niece, was 15, one of her classmates asked during a history lesson if she was related to the Himmler. "Yes," she stammered, at which there was a deathly hush in the classroom and the teacher, embarrassed and unsure, quickly moved the lesson on. As she grew older, Katrin gave her family history a wide berth, but married to an Israeli whose family was confined to the Warsaw Ghetto and with a young, half-Jewish son, she realized that she could not evade the past so easily. Katrin Himmler’s cool but meticulous examination of the Himmler story reveals—in all its dark complexity—the gulf between the "normality" of bourgeois family life and the horrors perpetrated by one member. A more nuanced portrait of Heinrich himself emerges—not a lone evil executioner, but a middle-class family man, loved and fully supported by his respectable German family.

Katrin Himmler is the great niece of Heinrich Himmler, head of the SS, Gestapo, and leading organizer of the Holocaust.