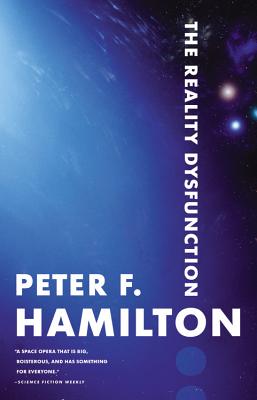 The Reality Dysfunction is a modern classic of science fiction from Peter F. Hamilton, an extraordinary feat of storytelling on a truly epic scale.

"A space opera that is big, boisterous, and has something for everyone." —Science Fiction Weekly

In AD 2600 the human race is finally beginning to realize its full potential. Hundreds of colonized planets scattered across the galaxy host a multitude of prosperous and wildly diverse cultures. Genetic engineering has pushed evolution far beyond nature's boundaries, defeating disease and producing extraordinary spaceborn creatures. Huge fleets of sentient trader starships thrive on the wealth created by the industrialization of entire star systems. And throughout inhabited space the Confederation Navy keeps the peace. A true golden age is within our grasp.

But on a primitive colony planet, a renegade criminal's chance encounter with an utterly alien entity unleashes the most primal of humanity’s fears. An extinct race which inhabited the galaxy aeons ago called it "The Reality Dysfunction." It is the nightmare which has prowled beside us since the beginning of history.

Peter F. Hamilton was born in Rutland, England in 1960. He began writing in 1987, and sold his first short story to Fear magazine in 1988. He has also been published in Interzone and the In Dreams and New Worlds anthologies, and several small press publications. His first novel was Mindstar Rising, published in 1993, and he has been steadily productive since then. Peter lives near Rutland Water with his wife and two children.

"A space opera that is big, boisterous, and has something for everyone."—Science Fiction Weekly

"This series is taking on one of SF's (and maybe all of literature's) primal jobs: the creation of a world with the scale and complexity of the real one."—Locus