Confront and Conceal: Obama's Secret Wars and Surprising Use of American Power (Hardcover) 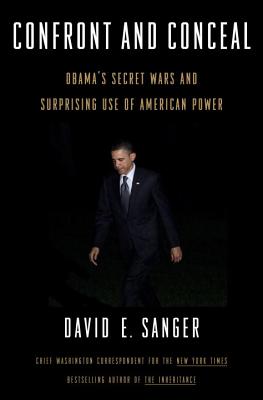 "Stunning revelations...This is an account that long will be consulted by anyone trying to understand not just Iran but warfare in the 21st century...an important book." -Tom Ricks, "New York Times"
FROM THE BESTSELLING AUTHOR OF "THE INHERITANCE," A REVEALING AND NEWS-BREAKING ACCOUNT OF OBAMA'S AGGRESSIVE USE OF INNOVATIVE WEAPONS AND NEW TOOLS OF AMERICAN POWER TO MANAGE A RAPIDLY SHIFTING WORLD OF GLOBAL THREATS AND CHALLENGES
Inside the White House Situation Room, the newly elected Barack Obama immerses himself in the details of a remark-able new American capability to launch cyberwar against Iran--and escalates covert operations to delay the day when the mullahs could obtain a nuclear weapon. Over the next three years Obama accelerates drone attacks as an alter-native to putting troops on the ground in Pakistan, and becomes increasingly reliant on the Special Forces, whose hunting of al-Qaeda illuminates the path out of an unwin-nable war in Afghanistan.
"Confront and Conceal "provides readers with a picture of an administration that came to office with the world on fire. It takes them into the Situation Room debate over how to undermine Iran's program while simultaneously trying to prevent Israel from taking military action that could plunge the region into another war. It dissects how the bin Laden raid worsened the dysfunctional relationship with Pakistan. And it traces how Obama's early idealism about fighting "a war of necessity" in Afghanistan quickly turned to fatigue and frustration.
One of the most trusted and acclaimed national security correspondents in the country, David Sanger of the "New York Times "takes readers deep inside the Obama adminis-tration's most perilous decisions: The president dispatch-es an emergency search team to the Gulf when the White House briefly fears the Taliban may have obtained the Bomb, but he rejects a plan in late 2011 to send in Special Forces to recover a stealth drone that went down in Iran. Obama overrules his advisers and takes the riskiest path in killing Osama bin Laden, and ignores their advice when he helps oust Hosni Mubarak from the presidency of Egypt.
"The surprise is his aggressiveness," a key ambassador who works closely with Obama reports.
Yet the president has also pivoted American foreign policy away from the attritional wars of the past decade, attempting to preserve America's influence with a lighter, defter touch--all while focusing on a new era of diplomacy in Asia and reconfiguring America's role during a time of economic turmoil and austerity.
As the world seeks to understand whether there is an Obama Doctrine, "Confront and Conceal "is a fascinating, unflinching account of these complex years, in which the president and his administration have found themselves struggling to stay ahead in a world where power is diffuse and America's ability to exert control grows ever more elusive.

DAVID E. SANGER is the chief Washington correspondent for the "New York Times" and bestselling author of "The Inheritance." He has been a member of two teams that won the Pulitzer Prize and has received numerous awards for coverage of the presidency and national security policy. He also teaches national security policy at Harvard's Kennedy School of Government.

"A must-read for policy wonks and a good primer on how American power works beyond our borders." --Kirkus

"Penetrating history of the presiden'ts effort to grapple with a world in flux..." --New York Times

"Sanger is one of the leading national security reporters in the United States, and this astonishingly revealing insider's account of the Obama administration's foreign policy process is a triumph of the genre.'' --Foreign Affairs