The Inheritance: The World Obama Confronts and the Challenges to American Power (Paperback) 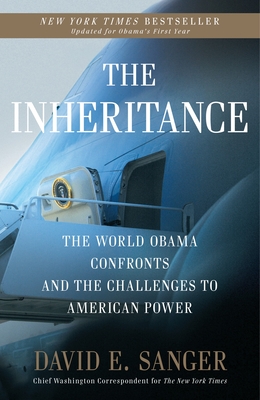 Readers of The New York Times know David Sanger as one of the most trusted correspondents in Washington, one to whom presidents, secretaries of state, and foreign leaders talk with unusual candor. Now, with a historian’s sweep and an insider’s eye for telling detail, Sanger delivers an urgent intelligence briefing on the world America faces.

In a riveting narrative, The Inheritance describes the huge costs of distraction and lost opportunities at home and abroad as Iraq soaked up manpower, money, and intelligence capabilities. The 2008 market collapse further undermined American leadership, leaving the new president with a set of challenges unparalleled since Franklin D. Roosevelt entered the Oval Office.

Sanger takes readers into the White House Situation Room to reveal how Washington penetrated Tehran’s nuclear secrets, leading President Bush, in his last year, to secretly step up covert actions in a desperate effort to delay an Iranian bomb. Meanwhile, his intelligence chiefs made repeated secret missions to Pakistan as they tried to stem a growing insurgency and cope with an ally who was also aiding the enemy–while receiving billions in American military aid. Now the new president faces critical choices: Is it better to learn to live with a nuclear Iran or risk overt or covert confrontation? Is it worth sending U.S. forces deep into Pakistani territory at the risk of undermining an unstable Pakistani government sitting on a nuclear arsenal? It is a race against time and against a new effort by Islamic extremists–never before disclosed–to quietly infiltrate Pakistan’s nuclear weapons program.

“Bush wrote a lot of checks,” one senior intelligence official told Sanger, “that the next president is going to have to cash.”

The Inheritance takes readers to Afghanistan, where Bush never delivered on his promises for a Marshall Plan to rebuild the country, paving the way for the Taliban’s return. It examines the chilling calculus of North Korea’s Kim Jong-Il, who built actual weapons of mass destruction in the same months that the Bush administration pursued phantoms in Iraq, then sold his nuclear technology in the Middle East in an operation the American intelligence apparatus missed. And it explores how China became one of the real winners of the Iraq war, using the past eight years to expand its influence in Asia, and lock up oil supplies in Africa while Washington was bogged down in the Middle East. Yet Sanger, a former foreign correspondent in Asia, sees enormous potential for the next administration to forge a partnership with Beijing on energy and the environment.

At once a secret history of our foreign policy misadventures and a lucid explanation of the opportunities they create, The Inheritance is vital reading for anyone trying to understand the extraordinary challenges that lie ahead.

DAVID E. SANGER is the chief Washington correspondent for The New York Times. In twenty-six years at the Times, he has been a member of two teams that won the Pulitzer Prize and has received numerous awards for investigative, national security, and White House reporting. He lives in Washington, D.C., with his wife and two sons.

“The Inheritance reaffirms Thomas Jefferson's belief that for the American democracy to work there must be an informed citizenry. That means great reporting by great reporters is always required.  David Sanger's book epitomizes the requirement. He goes through the world of challenges and opportunities that lie dead as well as ahead for the United States globally. Iraq, Afghanistan, Pakistan, Iran, North Korea and China are on the list. So are matters nuclear and economic, among others. Sanger's telling is full of behind-the-door stories that read like Alan Furst spy novels. This is a superior work of journalism.”
—Jim Lehrer, executive editior and anchor, The NewsHour

“One of the most comprehensive—and harrowing—accounts of American foreign policy ever written….Sanger’s book might be the best transition document the new president and his advisers—and the rest of the U.S.—can read.”
—Richard Pious, author of The President, Congress and the Constitution and The War on Terrorism and the Rule of Law

“Sanger’s behind-the-scenes account of the Bush Administration’s foreign policy is laced with scoops and secret conversations about a world spinning out of America’s control....Over to you, Mr. President.”
—Romesh Ratnesar, Time

“Prescient, relevant—and great reading for people who want to have insomnia.”
—Jon Stewart, The Daily Show

“An in-depth look…at where America stands in the world, why in-dpeth reporting by the Fourt Estate keeps government honest, and how the Obama Administration faces global challenges not of its own making.”
—Mike Smith, The Huffington Post

“One of the finest journalists of our time, David Sanger tells the surprising stories of crucial, heretofore-hidden events in Washington and around the globe that have culminated in the unprecedented world crisis that now faces us.  For the incoming President and the rest of us, Sanger's important book provides both understanding and hope. The Inheritance should be essential reading. "
—Michael Beschloss

“Somehow, David Sanger has broken through the secrecy and the government gobbledygook to tell us how we got to where we are and the choices this leaves for the next administration. He reveals inside stuff we have never heard in detail that will surprise and sometimes shock, yet he has framed it all in language the specialist will appreciate and the layman can understand. One of the most important books of the year.”
—Bob Schieffer, chief Washington correspondent, CBS News

“A brilliant tour d’horizon of world trouble spots, world crises and world-class challenges….This volume has the title of a policy book but the air of a non-fiction page-turner, in the spirit and example of David Halberstam….Put the remote and the BlackBerry away, Mr. President, and start reading.”
—David Shribman, Toronto Globe and Mail