Saladin: The Sultan Who Vanquished the Crusaders and Built an Islamic Empire (Paperback) 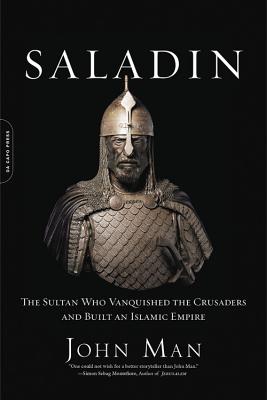 In this authoritative biography, historian John Man brings Saladin and his world to life with vivid detail in "a rollicking good story" (Justin Marozzi).

Saladin remains one of the most iconic figures of his age. As the man who united the Arabs and saved Islam from Christian crusaders in the twelfth century, he is the Islamic world's preeminent hero. A ruthless defender of his faith and brilliant leader, he also possessed qualities that won admiration from his Christian foes.

But Saladin is far more than a historical hero. Builder, literary patron, and theologian, he is a man for all times, and a symbol of hope for an Arab world once again divided. Centuries after his death, in cities from Damascus to Cairo and beyond, to the Arabian Peninsula and the Gulf, Saladin continues to be an immensely potent symbol of religious and military resistance to the West. He is central to Arab memories, sensibilities, and the ideal of a unified Islamic state.

John Man charts Saladin's rise to power, his struggle to unify the warring factions of his faith, and his battles to retake Jerusalem and expel Christian influence from Arab lands. Saladin explores the life and enduring legacy of this champion of Islam while examining his significance for the world today.

John Man is a historian and travel writer with a special interest in Asia. His many acclaimed books include bestselling biographies of Genghis Khan and Attila the Hun, as well as The Great Wall and The Terracotta Army. He lives in the United Kingdom.

"One could not wish for a better storyteller than John Man."--Simon Sebag Montefiore, author of Jerusalem


"A worthy biography of an important Muslim hero"--Foreword Reviews


"[A] masterful biography...The book tells a clear, vivid story of seemingly endless conflict, showing the strengths and weaknesses of both Christians and Muslims. The characters are fascinating...Man's style and pacing are just right for the general reader. This account provides valuable perspective for the twenty-first century tensions between Islam and the West."—Internet Review of Books, 9/29/16

"An excellent overview on this complex man and his time."
—Military Periscope

"The author of this book is an entertaining storyteller with an ear for a good turn of phrase."—The Historian

"Man presents a complete biographical account of Saladin's life, while also building his narrative around the Crusades...Saladin can also be characterized as a contribution to the popular history of the Crusades...This volume...succeeds in presenting a vivid picture of medieval life in the Middle East that will appeal to a popular audience."—H-Net