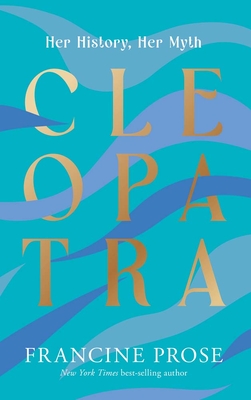 “Where Prose really sparkles: her critiques of the cultural depictions of Cleopatra.”—Allison Arieff, San Francisco Chronicle

The siren passionately in love with Mark Antony, the seductress who allegedly rolled out of a carpet she had herself smuggled in to see Caesar, Cleopatra is a figure shrouded in myth. Beyond the legends immortalized by Plutarch, Shakespeare, George Bernard Shaw, and others, there are no journals or letters written by Cleopatra herself. All we have to tell her story are words written by others. What has it meant for our understanding of Cleopatra to have had her story told by writers who had a political agenda, authors who distrusted her motives, and historians who believed she was a liar?

Francine Prose delves into ancient Greek and Roman literary sources, as well as modern representations of Cleopatra in art, theater, and film, to challenge narratives driven by orientalism and misogyny and offer a new interpretation of Cleopatra’s history through the lens of our current era.

Francine Prose is the author of numerous books, including Lovers at the Chameleon Club, Paris 1932; Anne Frank: The Book, The Life, The Afterlife; and Reading Like a Writer. A Distinguished Writer in Residence at Bard College, she lives in New York.

“Francine Prose offers a feminist reinterpretation of the life of the Egyptian queen. Her chapter ‘Cleopatra on Film’ features biting observations.”—Martin Chilton, Independent, “Books of the Month”

“A thoughtful, sympathetic portrait of a legendary historical figure.”—Kirkus Reviews

“The most effective part of the book is when Prose steps outside of history entirely and casts a critical eye on how books and movies made Cleopatra into a villain.”—Marissa Moss, New York Journal of Books

“A nuanced portrait of a powerful woman of enduring fascination.”—Nina MacLaughlin, Boston Globe

“Where Prose really sparkles: her critiques of the cultural depictions of Cleopatra.”—Allison Arieff, San Francisco Chronicle

“With her signature wit, incisiveness, and command, . . . Prose elucidates historical and cultural complexities, separates facts from fantasy, shares vivid and arresting intimate details, and brings humor and ‘human warmth’ to her corrective portrait of this extraordinarily brilliant and heroic ruler.”—Donna Seaman, Booklist

“This account stands out from the rest by highlighting the racist, imperialist and orientalist nature of Cleopatra’s portrayals, and for this it should be applauded.”—Emma Southon, author of A Fatal Thing Happened on the Way to the Forum