Praetorian: The Rise and Fall of Rome's Imperial Bodyguard (Hardcover) 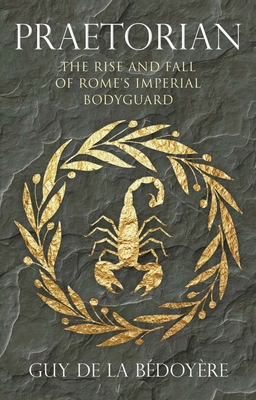 By Guy de la Bédoyère
Email or call for price.
Out of Print

A riveting account of ancient Rome’s imperial bodyguard, the select band of soldiers who wielded the power to make—or destroy—the emperors they served

Founded by Augustus around 27 B.C., the elite Praetorian Guard was tasked with the protection of the emperor and his family. As the centuries unfolded, however, Praetorian soldiers served not only as protectors and enforcers but also as powerful political players. Fiercely loyal to some emperors, they vied with others and ruthlessly toppled those who displeased them, including Caligula, Nero, Pertinax, and many more. Guy de la Bédoyère provides a compelling first full narrative history of the Praetorians, whose dangerous ambitions ceased only when Constantine permanently disbanded them.

de la Bédoyère introduces Praetorians of all echelons, from prefects and messengers to artillery experts and executioners. He explores the delicate position of emperors for whom prestige and guile were the only defenses against bodyguards hungry for power. Folding fascinating details into a broad assessment of the Praetorian era, the author sheds new light on the wielding of power in the greatest of the ancient world’s empires.

Guy de la Bédoyère is author of a widely admired series of books on Romano-British history. He has appeared regularly on the UK’s Channel 4 archaeology series Time Team and is well known in the United States for his volume The Romans for Dummies. He lives in Grantham, UK.

“Any future researcher into the subject will certainly begin here.”—Peter Jones, Times (London)

"This book is a lively and up-to-date history of the Praetorian Guard, the anti-coup divisions of the Roman emperors from Augustus to Constantine. De la Bédoyère tells their story with clarity and panache, and his book can be most warmly recommended both to aspiring tyrants and the ordinary armchair historian."—Peter Thonemann, Sunday Times

"This is a fast paced and engaging history of the Praetorian Guard."—Harry Sidebottom, Sunday Telegraph

"The dramatic story of the soldiers at the heart of the Roman empire. Lively and full of insight, de la Bedoyere traces the history of the praetorians and the emperors they served, murdered and made, through three hundred years of intrigue and drama."—Adrian Goldsworthy

"A definitive and highly readable account of a key institution of the Roman Empire."—Tom Holland, author of Rubicon: The Last Years of the Roman Republic