Crusade for Justice: The Autobiography of Ida B. Wells, Second Edition (Paperback) 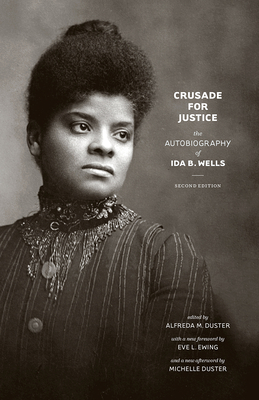 “She fought a lonely and almost single-handed fight, with the single-mindedness of a crusader, long before men or women of any race entered the arena; and the measure of success she achieved goes far beyond the credit she has been given in the history of the country.”—Alfreda M. Duster

Ida B. Wells is an American icon of truth telling. Born to slaves, she was a pioneer of investigative journalism, a crusader against lynching, and a tireless advocate for suffrage, both for women and for African Americans. She co-founded the NAACP, started the Alpha Suffrage Club in Chicago, and was a leader in the early civil rights movement, working alongside W. E. B. Du Bois, Madam C. J. Walker, Mary Church Terrell, Frederick Douglass, and Susan B. Anthony.

This engaging memoir, originally published 1970, relates Wells’s private life as a mother as well as her public activities as a teacher, lecturer, and journalist in her fight for equality and justice. This updated edition includes a new foreword by Eve L. Ewing, new images, and a new afterword by Ida B. Wells’s great-granddaughter, Michelle Duster.

Ida B. Wells (1862–1931) was an African American journalist, newspaper editor, and an early leader in the civil rights movement. Wells was born into slavery in Holly Springs, Mississippi, in 1862. The Emancipation Proclamation was passed about six months after her birth.

She was a journalist and publisher—an owner of the Memphis Free Speech and Headlight, in which appeared the first stories and editorials of her anti-lynching campaign. In retaliation, in 1892, a mob stormed the newspaper’s offices and smashed the equipment. Wells had already fled to Chicago and continued writing pamphlets and reports on lynching in America for the New York Age. She lectured across America and in Europe on the scourge of lynching.

In 1896, Wells formed the National Association of Colored Women. She was also a founding member of the National Association for the Advancement of Colored People (NAACP) in 1909. She continued to work for civil rights and African American empowerment, forming a black suffrage organization in Chicago, the Alpha Club. In 1930, she ran, unsuccessfully, for a seat in the Illinois state senate.

In 2020, a special Pulitzer Prize was awarded to Wells for “her outstanding and courageous reporting on the horrific and vicious violence against African Americans during the era of lynching.”


Michelle Duster, great-granddaughter of Ida B. Wells, is a writer, speaker, educator, and champion of racial and gender equity. She has written, edited, or contributed to eleven books, including Ida In Her Own Words and Ida From Abroad.

"[Wells was] a sophisticated fighter whose prose was as thorough as her intellect."
— Walter Goodman

"Besides being the story of an incredibly courageous and outspoken black woman in the face of innumerable odds, the book is a valuable contribution to the social history of the United States and to the literature of the women’s movement as well."
— Elizabeth Kolmer

"This book chronicles what would become groundbreaking journalism and community service. . . . We get a clearer picture of how integral women like [Wells] have been to the 'Lift as we climb' black club women’s movement, but also how black women’s activism was shaped after that. . . . Both [Eve L. Ewing and Michelle Duster] bring fresh insight into why Wells’ work is resonant today and how Wells’ work is still relevant. If you want a good understanding of why Ida B. Wells . . . is a historically significant figure on a national and international level, then this is the book that proves a more inclusive history is necessary."
— Newcity Lit

"It’s a classic that should be read just as often as the works of her contemporaries Frederick Douglass and W.E.B. Du Bois."