A Will to Believe: Shakespeare and Religion (Oxford Wells Shakespeare Lectures) (Paperback) 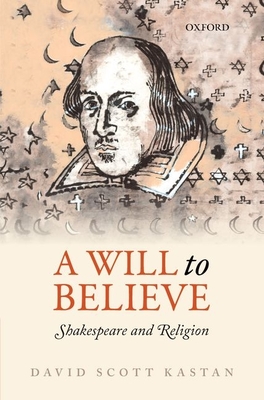 On December 19, 1601, John Croke, then Speaker of the House of Commons, addressed his colleagues: "If a question should be asked, 'What is the first and chief thing in a Commonwealth to be regarded?' I should say, 'Religion.' If, 'What is the second?' I should say, 'Religion.' If, 'What the third?' I should still say, 'Religion.'" But if religion was recognized as the "chief thing in a Commonwealth," we have been less certain what it does in Shakespeare's plays. Written and performed in a culture in which religion was indeed inescapable, the plays have usually been seen either as evidence of Shakespeare's own disinterested secularism or, more recently, as coded signposts to his own sectarian commitments. Based upon the inaugural series of the Oxford-Wells Shakespeare Lectures in 2008, A Will to Believe offers a thoughtful, surprising, and often moving consideration of how religion actually functions in his plays: not as keys to Shakespeare's own faith but as remarkably sensitive registers of the various ways in which religion charged the world in which he lived. The book shows what we know and can't know about Shakespeare's own beliefs and demonstrates, in a series of wonderfully alert and agile readings, how the often fraught and vertiginous religious environment of Post-Reformation England gets refracted by the lens of Shakespeare's imagination.

David Scott Kastan is the George M. Bodman Professor of English at Yale University. Among his books are Shakespeare and the Shapes of Time (1982), Shakespeare after Theory (1999), and Shakespeare and the Book (2001). He has produced important scholarly editions of Shakespeare's Henry IV, Part One, Milton's Paradise Lost, and Marlowe's Dr. Faustus and he edited the five-volume Oxford Encyclopedia of British Literature (2006). He currently serves as one of the general editors of the Arden Shakespeare.