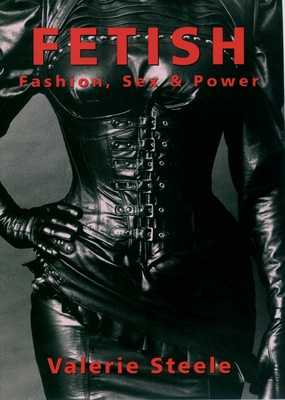 Kinky boots, corsets, underwear as outerwear, second-skin garments of rubber and leather, uniforms, body piercing.... Today everything from a fetishist's dream appears on the fashion runways. Although some people regard fetish fashion as exploitative and misogynistic, others interpret it as a positive Amazonian statement--couture Catwoman. But the connection between fashion and fetishism goes far beyond a few couture collections. For the past thirty years, the iconography of sexual fetishism has been increasingly assimilated into popular culture. Before Michelle Pfeiffer's Catwoman, there was Mrs. Peel, heroine of the 1960s television show The Avengers, who wore a black leather catsuit modeled on a real fetish costume. Street styles like punk and the gay leatherman look also testify to the influence of fetishism.
The concept of fetishism has recently assumed a growing importance in critical thinking about the cultural construction of sexuality. Yet until now no scholar with an in-depth knowledge of fashion history has studied the actual clothing fetishes themselves. Nor has there been a serious exploration of the historical relationship between fashion and fetishism, although erotic styles have changed significantly and sexual chic has become increasingly conspicuous.
Cultural historian Valerie Steele has devoted much of her career to the study of the relationship between clothing and sexuality, and is uniquely qualified to write this book. Marshalling a dazzling array of evidence from pornography, psychology, and history, as well as interviews with individuals involved in sexual fetishism, sadomasochism, and cross-dressing, Steele illuminates the complex relationship between appearance and identity. Based on years of research, her book Fetish: Fashion, Sex & Power explains how a paradigm shift in attitudes toward sex and gender has given rise to the phenomenon of fetish fashion.
Steele is to fetish dressing what Anne Rice is to vampires, writes Christa Worthington of Elle magazine, the intellectual interpreter of...wishes beyond our ken. According to Steele, fetishism shows how human sexuality is never just a matter of doing what comes naturally; fantasy always plays an important role. Steele provides provocative answers to such questions as: Why is black regarded as the sexiest color? Is fetishizing the norm for males? Does fetish fashion reflect a fear of AIDS? And why do so many people love shoes?

Valerie Steele is a cultural historian specializing in the history of fashion. She received her Ph.D. from Yale University and teaches at the Fashion Institute of Technology. Dr. Steele has appeared frequently on television and radio. Her other books include Fashion and Eroticism, Paris Fashion, Men and Women: Dressing the Part, and Women of Fashion.